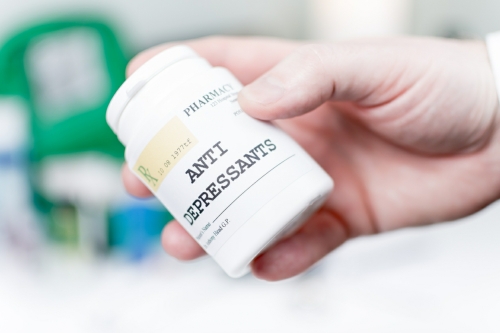 Psychiatrists and GPs increasingly combine mirtazapine with an SSRI (selective serotonin reuptake inhibitor) or SNRI (serotonin-noradenaline reuptake inhibitor) antidepressant for patients whose depression does not respond to a single antidepressant. A large clinical trial led by researchers at the Universities of Bristol, Exeter, Keele, Manchester and Hull York Medical School, and published in the British Medical Journal today, looked at the effectiveness of adding mirtazapine to an SSRI or SNRI in patients who remain depressed after at least six weeks of conventional (SSRI or SNRI) antidepressant treatment. They found that this combination was no more effective in improving depression than placebo and call on doctors to rethink its use.

The study, funded by the National Institute for Health Research, also found that patients taking mirtazapine in combination with another antidepressant had more adverse effects and were more likely to stop treatment than those who took an antidepressant and placebo.

Depression is one of the top five contributors to the global burden of disease and by 2030 is predicted to be the leading cause of disability in high income countries. People with depression are usually managed in primary care in the UK and antidepressants are often the first line of treatment. However, many patients do not respond to antidepressants.

The National Institute for Health and Care Excellence (NICE) advises GPs to reconsider treatment if there has been no response after four to six weeks of treatment. The practice of adding mirtazapine has grown as psychiatrists and GPs search for effective ways of treating those who don’t respond to a single antidepressant. Previous small-scale studies had shown that this combination might be effective.

Dr David Kessler from the Centres for Academic Mental Health and Academic Primary Care at the University of Bristol, and lead author of the study, said: “Half of patients in primary care who take antidepressants remain depressed despite sticking to their treatment, yet there is little evidence about how to treat those for whom the drugs don’t work.

“Our study has found that there is unlikely to be a clinically important benefit for mirtazapine over placebo in addition to an SSRI or SNRI antidepressant in primary care patients with treatment resistant depression, and that the combination is not well tolerated. We recommend that GPs think very carefully before adding mirtazapine as a second antidepressant in this group of patients. This is particularly important when there are clear alternatives such as cognitive behavioural therapy, which has been shown to be effective in this group of patients.”

Patients were aged over 17 years, were being treated for depression in primary care, and had been taking an SSRI or SNRI antidepressant for at least six weeks. They were still depressed using International Classification of Diseases (ICD-10) criteria. All 480 patients who took part continued to take their SSRI or SNRI and were randomly assigned to one of two groups: either additionally taking mirtazapine or a placebo. Neither the patients nor researchers knew to which group each patient had been assigned. They were followed up at 12, 24 and 52 weeks to see whether their depression had improved.

At 12 weeks just under 40 per cent of patients had responded to treatment as measured by a halving of the severity of their depressive symptoms; there was a small difference in favour of the mirtazapine group but it was not clinically important and the study could not rule out the possibility of ‘no effect’. Outcomes at the later time points showed even smaller differences between the groups with no evidence of worthwhile benefit over the longer term.

About the Centre for Academic Primary Care

About the Centre for Academic Mental Health

The Centre for Academic Mental Health (CAMH) at the University of Bristol brings together researchers working on mental health within Population Health Sciences at Bristol Medical School.  We have an internationally recognised research programme funded by the MRC, NIHR, Wellcome Trust and other medical research charities.  We are multidisciplinary and the researchers in the Centre include psychiatrists, epidemiologists, GPs, public health physicians, statisticians, psychologists and social scientists.

The trial was run in collaboration with the following centres:

The views expressed are those of the author(s) and not necessarily those of the NHS, the NIHR or the Department of Health and Social Care.


About the National Institute for Health Research

This work uses data provided by patients and collected by the NHS as part of their care and support and would not have been possible without access to this data. The NIHR recognises and values the role of patient data, securely accessed and stored, both in underpinning and leading to improvements in research and care. Read more