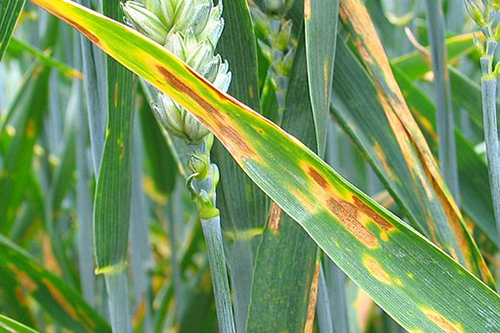 Scientists from the Universities of Bristol and Hannover studying a naturally-produced compound that inspired the biggest selling family of commercial agricultural fungicides have, for the first time, discovered how this important class of compound is synthesised in nature. The findings could potentially be used in the future to enable a ‘pick and mix’ approach with combinations of enzymes to make designer biosynthetic pathways for new compounds that could help to control crop diseases.

Although chemically synthesised, the strobilurin fungicides were inspired by a compound that is naturally-produced by the mushroom-forming fungus called Strobilurus tenacellus. The fungicides main use is to help protect cereal crops against ‘Septoria tritici’ one of the most damaging diseases of wheat.

The EPSRC and BBSRC-funded study, led by Dr Andy Bailey and Professor Chris Willis from Bristol’s BrisSynBio and Bristol Bio Design research institutes and Professor Russell Cox from the University of Leibniz in Hannover, describe in Nature Communications how the compound is synthesised in nature.

Using whole genome DNA sequence of the strobilurins fungus, researchers first identified a cluster of genes together comprising all the enzymes necessary for strobilurin synthesis. Strobilurins are based on an unusual polyketide, where synthesis is initiated with a benzoyl CoA starter molecule rather than the more conventional acetyl unit. Whilst there is a precedent for this in fungi, (the squalastatin pathway), the biosynthesis of the benzoyl starter for strobilurins was found to operate via a novel route.

After the core polyketide chain is formed, the molecule undergoes a complex rearrangement to make the β-methoxyacrylate toxophore. The enzyme responsible for this was characterised by expression in the bacterium E. coli and shown to be an FAD-dependent oxidase.

Dr Andy Bailey, Reader in Molecular Mycology at the University of Bristol said: “Given that strobilurins have been a major part of crop protection for such a long time, it is surprising that it is only now that we have been able to identify the natural pathway for their synthesis.”

Professor Russell Cox from Leibniz Universität, Hannover, added: “Such a Meinwald-type rearrangement is extremely rare in nature and identifying an enzyme responsible for this is a significant breakthrough for biotechnology.”