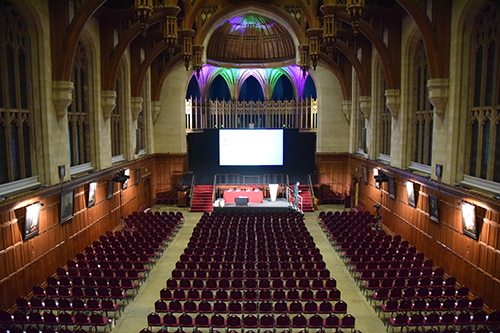 The Great Hall in the Wills Memorial Building, lit in suffragette colours with the new portraits on the walls 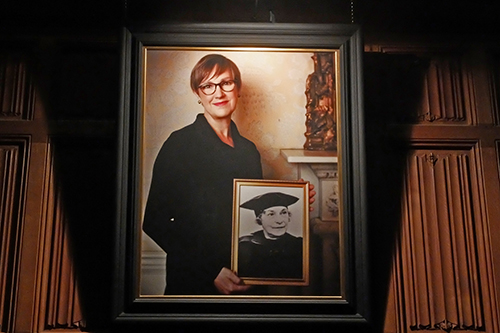 Professor Judith Squires with Winifred Shapland, former Registrar at the University of Bristol

Now, thanks to a project specially-commissioned to mark 100 years since the first women in Britain won the right to vote, a series of ten portraits redresses the balance and celebrates notable Bristol women who have changed the institution – and, indeed, the world.

They will be unveiled at an interactive panel discussion event on 22 November, entitled 'Women and equality: the next 100 years', which looks to the future of gender equality by asking what key challenges still need to be overcome and how.

The portraits, taken by photographer Jessica Augarde, will be the first of many initiatives to honour women at the University, with new permanent artworks to be commissioned every year until 2028: the 100-year anniversary of full suffrage in Britain, when all women over 21 were given the right to vote, not just those over the age of 30 who owned property.

Among the women featured are activists, educators and research pioneers:

Photographed holding images of these inspirational and influential women are pioneering members of today's University community. These include Dr Peggy Styles, who became the University's oldest graduate when she collected her postdoctorate in 2016, aged 86; and Lara Lalemi, a Chemistry PhD student who's been an advocate for encouraging people from diverse backgrounds to study STEM subjects.

The achievements of some of the women featured are well-known, such as The Right Honourable the Baroness Hale of Richmond - the University's former Chancellor and the first woman to hold the role of Supreme Court President.

But the achievements of many of the women, especially those born in the 19th Century, aren't so widely known and celebrated.

Enid Stacy, who won a scholarship to study Advanced Latin at University College, Bristol (the precursor to the University of Bristol), between 1887 and 1890, went on to became one of the best-known female propagandists for British socialism in the late 19th century, speaking at 122 meetings in 1894 alone.

It was during a wave of strikes in Bristol in 1889 when Enid heard an inspiring speech from Labour leader Tom Mann, prompting her to join the Gasworkers' Union and dedicate her life to activism and raising awareness of equality issues. Her portrait is held by Dr Sumita Mukherjee, an historian whose research has looked at how Indian suffragettes campaigned for the vote around the world.

Also celebrated in the project is 95-years-old graduate Dr Gaositwe Chiepe, who completed her Master's degree at Bristol in 1959. In doing so, she became the first woman from Botswana to earn both an undergraduate and postgraduate degree.

In 1966, she became Botswana's first director of education and she laid down reforms that transformed the education system such that today Botswana has one of the highest literacy rates in Africa with equally high progression rates from primary through to higher education.  Her portrait is held by Samantha Budd, Chief Executive of Bristol SU and the first black woman to be a Chief Executive of a students' union in the UK.

Professor Judith Squires, incoming Deputy-Vice Chancellor and the most senior woman at the University, is pictured holding a photograph of Winifred Shapland - Registrar at the University of Bristol for nearly 20 years and the first female Registrar of any British university.

Professor Squires said: "As a University with a proud history of giving women equal opportunities, we wanted to evidence and celebrate this in our most famous building. It's only right that our students will now graduate in a hall which features inspirational women alongside portraits of our Vice-Chancellors.

"Although the achievements of women such as Lady Hale, Jean Golding and Dorothy Hodgkin have been rightly honoured at the University in the past, we also wanted to uncover the stories of unsung heroines, whose achievements aren't as well-known and documented as they should be.

"Featuring them alongside ten women in today's University community gave us the opportunity to show how their legacy is continuing to inspire our teaching and work today, showcasing our current pioneers and prompting a conversation about how we can work together as we strive further towards equality."

The portraits will be a lasting legacy of the University's Vote 100 campaign, which has been run as part of local celebrations led by Bristol Women's Voice throughout 2018 to explore Bristol's history as a city of change-makers and consider how it can continue to fight for equality in the future.

You can watch a video of 'Women and equality: the next 100 years' on Facebook: