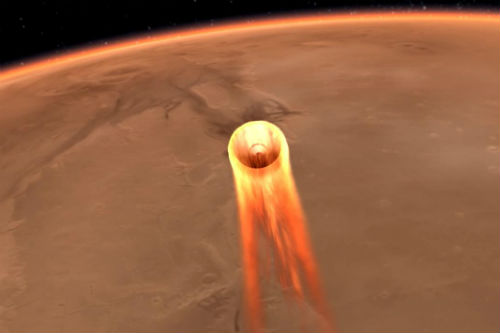 An artist's impression of InSight's Entry, Descent and Landing (EDL). Image by NASA/JPL-Caltech. 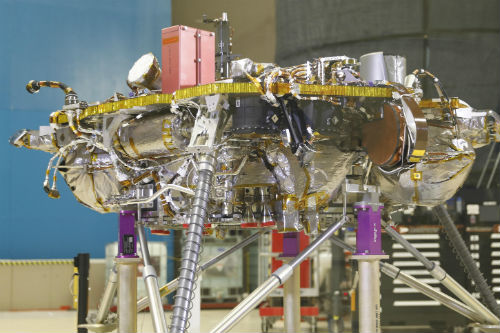 The 300-million-mile journey that culminated in NASA’s InSight landing on Mars this week represents a major scientific coup for all involved, including mission participants from the University of Bristol.

The £635m lander, which came to rest on Mars on Monday, will study the makeup and dimensions of the Red Planet’s core.  Its instruments include a three-component seismometer designed and built in the UK by a team involving researchers from the University of Bristol.

Speaking at the landing event on Monday at Oxford University, mission co-investigator Dr Nick Teanby from Bristol’s School of Earth Sciences, said: "It is very exciting to finally be arriving at Mars. We have spent the last few years trying to predict what we will see on Mars in terms of marsquakes and meteorite impacts using images from orbiting spacecraft, but this is a new planet, so we really won't know until the seismometer is deployed.

"By measuring the refraction and reflection of seismic waves generated by marsquakes we can determine things like core size, crust thickness, and infer how the planet evolved over time. This will have implications for how the Earth and other terrestrial planets formed in the early solar system.

“Networks of seismometers are used routinely on Earth to determine the planet's structure, but even with a single instrument on Mars our knowledge of its interior evolution will be vastly improved."

Four researchers from Bristol make up part of the international team, alongside Imperial College, Oxford University, RAL space, and the UK Space Agency, among others.

Anna Horleston, another of the researchers from Bristol University, added: "I've studied seismic data from all over the world but to get the chance to study data from Mars is just something else. To finally be arriving and to get to test out our techniques on real Martian seismic data is so exciting. The Entry, Descent and Landing sequence was absolutely terrifying, but I can't wait to see the first data."

The journey to Mars began seven months ago. Within minutes of landing on the Red Planet, InSight - which is short for Interior Exploration Using Seismic Investigations, Geodesy and Heat Transport - had sent its first pictures back to Earth, albeit obscured by the dust kicked up by the probe’s landing.

InSight is the first mission to explore Mars’ deep interior. It will spend the next two-years investigating how all terrestrial celestial bodies, including the Earth and the Moon, formed.