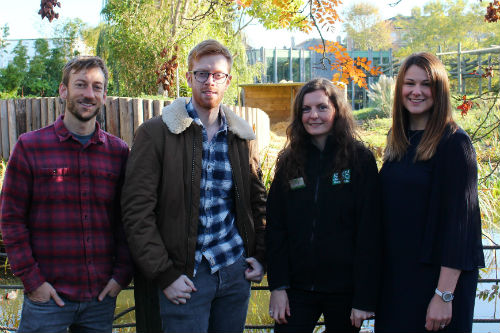 A team of scientists from the University of Bristol and Bristol Zoological Society have collaborated to develop a ‘ground-breaking’ new animal enrichment activity for the gorillas at Bristol Zoo Gardens.

The project integrates hidden computer technology with cognitive animal enrichment for the first time, to measure how gorillas solve complicated problems. The result is a wall-mounted modular device that the gorillas can use to solve a series of puzzles to receive reward items. The system’s modular design allows the game to be configured in a variety of different ways to both change the game’s difficulty and maintain its novelty.

The activity box features an in-built Go-Pro camera as well as electronic sensing equipment to record how, when and where the gorillas use it. When the device is up and running, this information will be available for keepers, researchers and the public to view in real-time on a website.

The project will be unveiled at a public showcase event at Bristol Zoo Gardens this week (Wednesday November 14), attended by scientists and animal welfare experts, such a primatologist and broadcaster, Dr Ben Garrod, who acted as an advisor on the project.

Now the team hope to secure further funding to continue the project and roll the product out to other zoos across the UK, or even globally.

Dr Fay Clark, who has led the project at Bristol Zoo, said: “We are so excited to finally reveal the results of 10 months of work, behind-the-scenes, to develop this ground-breaking new product.

“We have trialed a number of prototype designs at Bristol Zoo which have been very well used by the gorillas here. Looking at the video footage so far, and data logged from the device, the gorillas find the device challenging and can use a number of problem-solving strategies to solve the puzzles inside.”

Dr Clark added: “Enrichment activities such as this are very important to maintaining the interest and stimulation of animals in human care, and this project is a vital part of our on-going commitment to ensuring the highest standards of care and welfare for the animals we have at Bristol Zoo Gardens, and at our sister attraction, Wild Place Project.”

Lynsey Bugg, curator of mammals at Bristol Zoo Gardens, works closely with the gorilla group at the Zoo and said the activity cube and been well received. She said: “We have been using enrichment puzzles for many years with our gorillas and have enjoyed making them more complicated as the gorillas gradually worked them out. So it has been great to see the gorillas not only receive a new challenge, but to also be able to modify the difficultly of the puzzles and see how the gorillas use it - it has been really interesting.”

Dr Stuart Gray, from the University of Bristol’s Faculty of Engineering, said: “Historically here has been a lack of technology incorporated into zoo-based enrichment. Now we have developed a game which, from our findings so far, appears to be stimulating, rewarding, can promote play and gives the gorillas more choice and control in their environment.

“The ultimate aim of the project is to create a positive psychological state of pleasure and satisfaction in the gorillas, similar to that which is reported in humans when they are fully absorbed in a task. It also gives us researchers large new data sets to show exactly how the gorillas are behaving and using this puzzle device. There is nothing of its kind that has been developed before, so this is very exciting for us.”

Gorilla Game Lab has been funded by the Brigstow Institute - a University of Bristol scheme which brings researchers from different disciplines together with a range of partners across the city and beyond to experiment in new ways of living and being.

For more information on the project, visit www.gorillagamelab.com.