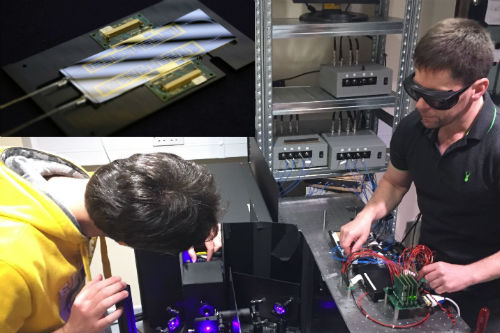 Dr Laing’s laboratory where the experiments were performed. Single photons of light are generated using a powerful Ti-Sapphire laser, to pump a series of nonlinear crystals, operated by PhD student and co-author Nicola Maraviglia (left). The single photons are collected into optical fibres and injected into the photonic chip, next to Laing (right). Inset top left is a close up of the photonic chip taken by NTT scientist and co-author, Nobuyuki Matsuda. University of Bristol 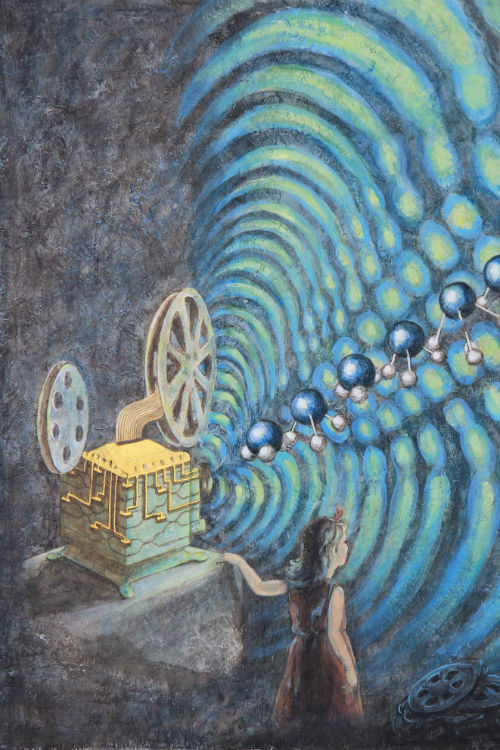 An artist’s impression of the photonic quantum simulations. The photonic chip, comprised of waveguides controlled through gold electronic wiring, is seen as a film projector. The light of the projector is quantum and the movie is the frame-by-frame evolution of an ammonia molecule vibrating. In this movie, the initial vibrational state of the ammonia molecule leads to a very high probability that it will lose one of its hydrogen atoms at the end of the movie. The painting is by Eleonora Martorana, a graduate of the Rome Academy of Fine Arts

Scientists have shown how an optical chip can simulate the motion of atoms within molecules at the quantum level, which could lead to better ways of creating chemicals for use as pharmaceuticals.

An optical chip uses light to process information, instead of electricity, and can operate as a quantum computing circuit when using single particles of light, known as photons. Data from the chip allows a frame-by-frame reconstruction of atomic motions to create a virtual movie of a molecule’s quantum vibrations, which is what lies at the heart of the research published today in Nature.

These findings are the result of a collaboration between researchers at the University of Bristol, MIT, IUPUI, Nokia Bell Labs, and NTT. As well as paving the way for more efficient pharmaceutical developments, the research could prompt new methods of molecular modelling for industrial chemists.

When lasers were invented in the 1960s, experimental chemists had the idea of using them to break apart molecules. However, the vibrations within molecules rapidly redistribute the laser energy before the intended molecular bond is broken. Controlling the behaviour of molecules requires an understanding of how they vibrate at the quantum level. But modelling these dynamics requires massive computational power, beyond what we can expect from coming generations of supercomputers.

The Quantum Engineering and Technology Labs at Bristol have pioneered the use of optical chips, controlling single photons of light, as basic circuitry for quantum computers. Quantum computers are expected to be exponentially faster than conventional supercomputers at solving certain problems. Yet constructing a quantum computer is a highly challenging long-term goal.

As reported in Nature, the team demonstrated a new route to molecular modelling that could become an early application of photonic quantum technologies. The new methods exploit a similarity between the vibrations of atoms in molecules and photons of light in optical chips.

Bristol physicist Dr Anthony Laing, who led the project, explained: “We can think of the atoms in molecules as being connected by springs. Across the whole molecule, the connected atoms will collectively vibrate, like a complicated dance routine. At a quantum level, the energy of the dance goes up or down in well-defined levels, as if the beat of the music has moved up or down a notch. Each notch represents a quantum of vibration.

“Light also comes in quantised packets called photons. Mathematically, a quantum of light is like a quantum of molecular vibration. Using integrated chips, we can control the behaviour of photons very precisely. We can program a photonic chip to mimic the vibrations of a molecule.

“We program the chip, mapping its components to the structure of a particular molecule, say ammonia, then simulate how a particular vibrational pattern evolves over some time interval. By taking many time intervals, we essentially build up a movie of the molecular dynamics.”

First author Dr Chris Sparrow, who was a student on the project, spoke of the simulator’s versatility: “The chip can be reprogrammed in a few seconds to simulate different molecules. In these experiments we simulated the dynamics of ammonia and a type of formaldehyde, and other more exotic molecules. We simulated a water molecule reaching thermal equilibrium with its environment, and energy transport in a protein fragment.

“In this type of simulation, because time is a controllable parameter, we can immediately jump to the most interesting points of the movie. Or play the simulation in slow motion. We can even rewind the simulation to understand the origins of a particular vibrational pattern.”

Joint first author, Dr Enrique Martín-Lopéz, now a Senior Researcher with Nokia Bell Labs, added: “We were also able to show how a machine learning algorithm can identify the type of vibration that best breaks apart an ammonia molecule. A key feature of the photonic simulator that enables this is its tracking of energy moving through the molecule, from one localised vibration to another. Developing these quantum simulation techniques further has clear industrial relevance.”

The photonic chip used in the experiments was fabricated by Japanese Telecoms company NTT.

Dr Laing explained the main directions for the future of the research: “Scaling up the simulators to a size where they can provide an advantage over conventional computing methods will likely require error correction or error mitigation techniques. And we want to further develop the sophistication of molecular model that we use as the program for the simulator. Part of this study was to demonstrate techniques that go beyond the standard harmonic approximation of molecular dynamics. We need to push these methods to increase the real-world accuracy of our models.

“This approach to quantum simulation uses analogies between photonics and molecular vibrations as a starting point. This gives us a head start in being able to implement interesting simulations. Building on this, we hope that we can realise quantum simulation and modelling tools that provide a practical advantage in the coming years.”

The work is based on Dr Laing’s Fellowship in Quantum Technologies from the Engineering and Physical Sciences Research Council (EP/N003470/1), and his involvement in the European Commission’s QUCHIP (H2020-FETPROACT-3-2014: quantum simulation). Support is also acknowledged from the European Research Council (ERC). A.N. is grateful for support from the Wilkinson Foundation. J.C. is supported by EU H2020 Marie Sklodowska-Curie grant number 751016. Y.N.J. was supported by NSF grant number DMR-1054020. J.L.O’B. acknowledges a Royal Society Wolfson Merit Award and a Royal Academy of Engineering Chair in Emerging Technologies. Fellowship support from EPSRC is acknowledged by A.L.