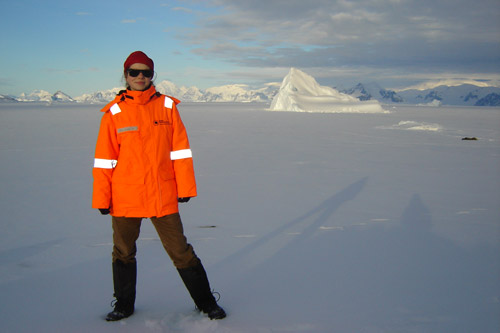 The seas around the West Antarctic Peninsula have experienced some of the fastest global warming in recent decades, increasing the rate and richness of biological activity in the region. Innovative analytical techniques and collaborative research projects involving scientists from around the world are helping to improve our understanding of the causes and consequences of environmental change.

A special issue of the journal Philosophical Transactions of the Royal Society A, , titled ‘The marine system of the West Antarctic Peninsula: status and strategy for progress in a region of rapid change’, edited by the University of Bristol’s Dr Kate Hendry, brings together some of the latest research in this area.

“There is currently a keen interest to improve our ability to study the impact of environmental change on Antarctica, and its feedbacks to the Earth System,” says Dr Hendry, a Royal Society University Research Fellow and Reader in Geochemistry in the School of Earth Sciences. “The special issue progresses this important area of science by developing new ideas and strategies for the future of marine research in a region of rapid change.”

Among the research included in the publication is a paper that overturns previously held theories about how “hotspots” of biological activity have emerged in submarine canyons - steep-sided valleys in the seabed of continental slopes that are involved in the transfer of particles and water between the shelf and the deeper ocean.

Researchers reveal that algae growing in these areas have become concentrated because of physical movement, rather than growing in situ, which suggests the canyons act as conveyor belts rather than incubators.  Another paper goes on to reveal the importance of the same biological hotspots to fish, penguins, whales and seals, as well as corals, sponges and molluscs.

Professor Mike Meredith, Head of the Polar Oceans Programme at British Antarctic Survey, and a guest editor on the issue, adds: “This is the most up-to-date assessment of what’s happening to this climatically sensitive region, where scientists are observing profound changes in the ocean. It draws out new knowledge concerning how the Antarctic seas are changing, and what their impacts are for marine productivity, ecosystems, and glacier retreat in what is a highly sensitive system. We now need to build on this new knowledge, and use it to improve predictions of how this and other polar regions will change into the future.”

Publication: ‘The marine system of the West Antarctic Peninsula: status and strategy for progress in a region of rapid change’ compiled and edited by Katharine R. Hendry, Michael P. Meredith and Hugh W. Ducklow, is published in the Philosophical Transactions of the Royal Society A, with support from the Southern Ocean Observing System (SOOS).

Read the collection of 14 papers here.