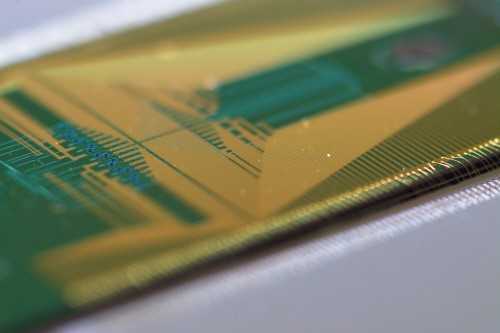 An international team of quantum scientists and engineers led by the University of Bristol and involving groups from China, Denmark, Spain, Germany and Poland, have realised an advanced large-scale silicon quantum photonic device that can entangle photons to incredible levels of precision.

While standard quantum hardware entangles particles in two states, the team has found a way to generate and entangle pairs of particles that each has 15 states.

The integrated photonic chip sets a new standard for complexity and precision of quantum photonics, with immediate applications for quantum technologies.

Integrated quantum photonics allows the routing and control of single particles of light with intrinsically high stability and precision, however to date it has been limited to small-scale demonstrations in which only a small number of components are integrated on a chip.

Scaling up these quantum circuits is of paramount importance to increasing the complexity and computational power of modern quantum information processing technologies, opening-up the possibility of many revolutionary applications.

The team, led by scientists from the University of Bristol’s Quantum Engineering Technology Laboratories (QET Labs) has demonstrated the first ever large-scale integrated quantum photonic circuit, which integrating hundreds of essential components, can generate, control and analyse high-dimensional entanglement with an unprecedented level of precision.

The quantum chip was realised using a scalable silicon photonics technology, similar to today’s electronic circuits, which would provide a path to manufacture massive components for the realization of a optical quantum computer.

The work, in collaboration with Peking University, Technical University of Denmark (DTU), Institut de Ciencies Fotoniques (ICFO), Max Planck Institute, Center for Theoretical Physics of the Polish Academy of Sciences, and University of Copenhagen, has been published today in the journal Science.

The coherent and precise control of large quantum devices and complex multidimensional entanglement systems has been a challenging task owing to the complex interactions of correlated particles in large quantum systems. Significant progress towards the realization of large-scale quantum devices has been recently reported in a variety of platforms including photons, superconductors, ions, dots and defects.

In particular, photonics represents a promising approach to naturally encode and process multidimensional qudit states in the photon’s different degrees of freedom.

In this work, a programmable path-encoded multidimensional entangled system with dimension up to 15×15 is demonstrated, where two photon exists over 15 optical paths at the same time and are entangled with each other.

Lead author, Dr Jianwei Wang, said: “It is the maturity of today’s silicon-photonics that allows us to scale up the technology and reach a large-scale integration of quantum circuits.

“This is the most beautiful thing of quantum photonics on silicon. Our quantum chip allows us to reach unprecedented levels of precision and control of multidimensional entanglement, a key factor in many quantum information tasks of computing and communication.”

Dr Anthony Laing, a lead academic in Bristol’s QETLabs and corresponding author, said: “Entanglement is a fascinating feature of quantum mechanics and one that we do not yet fully understand. This device and future generations of chips of increasing complexity and sophistication will allow us to explore this realm of quantum science and make new discoveries.”

Professor Mark Thompson, leader of the Bristol team, added: "We have used the same manufacturing tools and techniques that are exploited in today’s microelectronics industry to realise our silicon quantum photonic microchip. However, unlike conventional electronic circuits that utilise the classical behaviour of electrons, our circuits exploit the quantum properties of single particle of light. This silicon photonics approach to quantum technologies provides a clear path to scaling up to the many millions of components that are ultimately needed for large-scale quantum computing applications.”

More information and a copy of the paper, can be found online at the Science press package at http://www.eurekalert.org/jrnls/sci

The mission of QETLabs is to take quantum science discoveries out of the labs and engineer them into technologies for the benefit of society.  It brings together £50 million worth of activity that covers theoretical quantum physics through experiment, engineering and skills and training toward concept demonstrators of quantum technologies. Read more on our website: http://www.bristol.ac.uk/qet-labs/

Quantum information and its translation into technologies is one of the most exciting research activities in science and technology today. Long at the forefront of the growing worldwide activity in this area, the Bristol Quantum Information Institute crystallises our research across the entire spectrum, from theory to technology. With our expert cross-disciplinary team, including founders of the field, we have expertise in all major areas of theoretical quantum information science and in experiment. We foster partnerships with the private sector and provide superb teaching and training for the future generation of quantum scientists and engineers and the prototypes of tomorrow. Read more on our website: http://www.bristol.ac.uk/research/institutes/quantum/