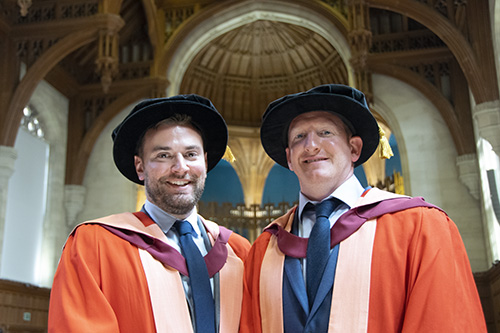 This follows a visit by the pair to the University in September last year when they spoke at the signing of the Time to Change pledge, which set out the University's commitment to change the way we think, talk and act about mental health.

Jonny and Neil's friendship started in 2008 when Neil – who was then a total stranger – stopped Jonny, recently diagnosed with depression and schizophrenia, from jumping off London's Waterloo Bridge.

Following a massive social media campaign, the two were reunited and now work all over the world to raise awareness of mental health disorders – helping to educate and break stigma. Their story was documented in Channel 4's Stranger on the Bridge.

Jonny was awarded an MBE for his services to mental health and suicide prevention in the Queen’s New Honours List of 2017. The pair have received numerous other major accolades, including a Pride of Britain Award for Neil in 2014.

In their acceptance speech, which was met with a standing ovation, Jonny said: "I never made it to my own graduation so this feels very special indeed. We’ve done so much work but this is an absolute highlight.

"Mental health and suicide prevention are areas we’re incredibly passionate about. We know the difference that help and intervention can make when someone is struggling with their mental health and also that suicide is not inevitable, therefore we have to do all we can to prevent it.

"I'm eternally grateful to Neil. To receive this with him means more than words can say really."

Jonny also had words of encouragement for those graduating alongside him: "I wish you every success, not just in your careers but in life as well. When I was your age, I was diagnosed with this form of schizophrenia and I really thought my life was over. But it was just the beginning. I overcame that adversity and if I can overcome any adversity then you can as well, so always remember that."

Mark Ames, Director of Student Services, presented Jonny and Neil with their honorary degrees in the Great Hall of the Wills Memorial Building.

He said: "It is with great pleasure that we welcome Jonny and Neil back to Bristol. Mental health and wellbeing is an area of increasing concern, for each of us personally but also for society.

"I find it striking that despite, or perhaps because, of living with mental illness, Jonny has discovered a profound meaning and purpose to his life which is to help improve the lives of others living with similar conditions.

"Equally, Neil's compassionate act of kindness which helped make this possible has also transformed the course of his own life, in ways he could not have anticipated when he stopped to talk to Jonny on that bridge."