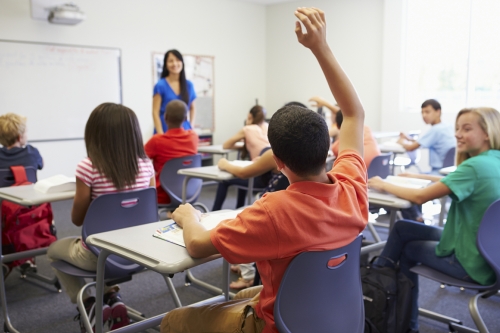 Pupils who have immigrated to the UK have a significantly more positive attitude towards school than their peers whose parents were born here, new research has revealed.

Experts from the University of Bristol and the London School of Economics and Political Science (LSE) analysed data from over 4,500 pupils aged 15 and 16 in 204 schools in England* and found immigration status is a key driver of attitude.

First generation immigrants – those born overseas and whose parents were also born overseas – were found to be 60 per cent more positive about education and its benefits than the average native student.

This attitude makes them more motivated to succeed and is strongly linked to academic achievement. Such an outlook also may be contagious, researchers believe.

Professor Simon Burgess, from the Department of Economics at Bristol, said: "Our analysis clearly shows that immigrant students have a more positive attitude to education than native students.

"People who emigrate are naturally more aspirational and risk-taking. Such grit and determination is passed from parents to children and we’ve seen how this then manifests in the school environment."

The research ruled out the influence of socio-economic background, gender, parents' jobs and schools' policies towards these students.

There was no sign of any differences in outlook between first and second-generation immigrants.

The findings, published today [20 July], appear to explain why pupils in London achieve significantly better GCSE results than the rest of England.

Gabriel Heller-Sahlgren, from the Department of Social Policy at LSE, said: "We found that students in London have much better attitudes to education on average compared with students in the rest of the country, which is entirely accounted for by immigration status.

"This supports previous research showing the so-called 'London effect' is largely due to schools' ethnic composition."

The next stage of research will focus on how the positive attitude of immigrant students might affect GCSE results.

‘Motivated to Succeed? Attitudes to Education among Native and Immigrant Pupils in England’ by Simon Burgess and Gabriel Heller-Sahlgren.