Royal Fort Garden named among the best in Britain 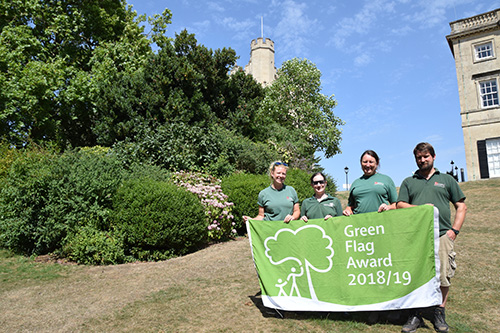 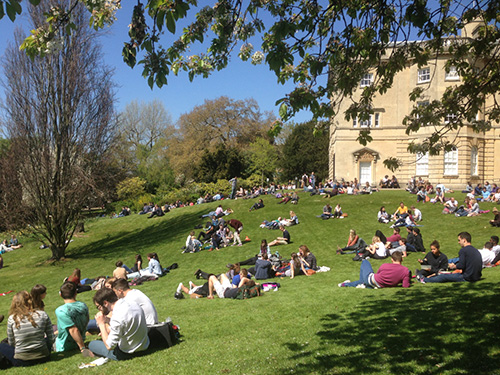 Students and staff enjoy Royal Fort Garden in the sunshine

Public gardens at the University of Bristol have been awarded a Green Flag Award – an accolade which officially makes it one of the best green spaces in the country.

Royal Fort Garden, tucked away between Tyndall Avenue and University Walk, is among a record-breaking 1,883 parks and green spaces to receive the accolade from Keep Britain Tidy. It's one of only three in the Bristol area, alongside Windmill Hill City Farm and Snuff Mills.

The award, now celebrating its 22th year, recognises and rewards the best parks and green spaces across the country. A Green Flag flying overhead is a sign to the public that the space boasts the highest possible standards, is beautifully maintained and has excellent facilities.

Royal Fort Garden began life as a Civil War fortification created to defend the city in the 17th century. It's now a popular relaxation spot, with the grand Royal Fort House providing a backdrop to the gardens which feature popular pieces of public art alongside a pond, trees and biodiverse habitats.

In addition to the flora and fauna, the mirror maze called 'Follow Me' is a popular attraction. It was designed by internationally recognised artist Jeppe Hein to mark the University’s centenary in 2009.

A more recent addition is 'Hollow' – an intricate structure, described as a modernist grotto, made from 10,000 wood samples collected from across the world. It was created by Katie Paterson, made in collaboration with architects Zeller & Moye, and unveiled in 2016.

The hot pink, colour-changing 'Thermo Gromit' currently resides in the garden as part of the Gromit Unleashed 2 public art trail.

Royal Fort Garden also boasts a wildflower meadow which was planted as part of the 'My Wild University' project and efforts to boost the number of pollinators.

Alan Stealey Head of External Estates said: "We are absolutely delighted to receive a Green Flag Award for the third year in a row.

"It's testament to the hard work of our team and their ongoing efforts to make Royal Fort Garden an inviting and relaxing place for staff, students and the public to enjoy.

"We hope people from across the city will come along and see for themselves why it’s been awarded a Green Flag – and do some Gromit spotting while they’re here!"

About the Green Flag Awards Scheme

The Green Flag Awards Scheme is run by the environmental charity Keep Britain Tidy, under licence from the Department of Communities and Local Government, in partnership with Keep Scotland Beautiful, Keep Wales Tidy and Keep Northern Ireland Beautiful, the Federation of City Farms and Community Gardens and the National Housing Federation.

Any green space that is accessible to the public is eligible to enter for a Green Flag Award.  Awards are given on an annual basis and winners must apply each year to renew their Green Flag status.  A Green Flag Community Award recognises quality sites managed by voluntary and community groups. Green Heritage Site accreditation is judged on the treatment of the site's historic features and the standard of conservation.