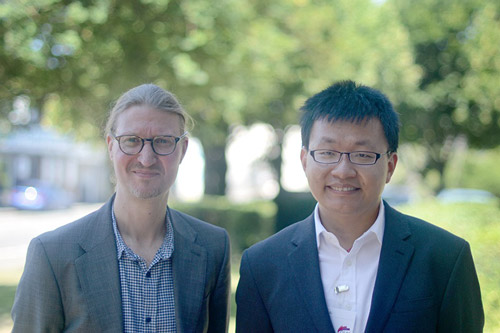 Quantum tech firm QLM has moved from the University of Bristol into their new home at Unit DX, a recently-opened scientific innovation centre close to Bristol Temple Meads station, to continue development of a methane detector that could cut greenhouse gas emissions.

Xiao said: “I have been visiting Unit DX since before it was fully opened, and have been looking forward to setting up QLM here full time. It’s great to be able to work alongside companies developing such exciting technologies. It means we now have space to grow the team, access to investors and facilities that can be very hard to find.”

In purely economic terms, methane leaks from well-heads and pipelines cost the industry itself between $6bn and $30bn a year. In addition to this, in 2016 the US Environmental Protection Agency (EPA) introduced regulations aimed at capping methane emissions in the oil and gas sector, a decision recently upheld by the courts despite the change in US leadership.

In the US, methane leaks from the natural gas and petroleum industry are now the number one source of methane emissions, surpassing livestock digestion and landfill. Although it is found in much lower concentrations than carbon dioxide, methane is around 25 times more potent, meaning that it still accounts for 28 percent of the amount of warming caused by carbon dioxide.

Xiao Ai has developed the detector which was crafted in-house, miniaturising the equipment and allowing it to be mounted to an unmanned drone. This presents the opportunity to cut survey costs to a tenth of the current cost, whilst simultaneously quadrupling the resolution of the data, and removing the need for calibration. The result is a product that could make surveying for methane leaks more accessible not only for businesses but for the NGOs that help to monitor them.

Xiao started the company during his fellowship with the Quantum Technology Enterprise Centre (QTEC), an EPSRC-funded programme and collaboration between the University of Bristol and Cranfield University. Its aim is to create a world-leading hub to train entrepreneurially minded quantum systems engineers.

All of the above would suggest that new technology from University of Bristol start-up, QLM, has come at the right time. QLM are developing a quantum-inspired laser radar, capable of detecting minute methane leaks and designed to be mounted on a drone for conducting aerial surveys. This would allow significant cost reductions in comparison to current surveys undertaken by helicopter.

The building was developed after founder Harry Destecroix discovered a lack of available laboratory space in the city for fledgling scientific companies. Harry had been looking for a home for his chemistry start-up, Ziylo, when the problem was identified. Opened in May, Unit DX has already played host to a number of QTEC events, including an investor showcase that helped raise finance for QLM’s seed stage funding. The location is fast becoming a centre of excellence for quantum technologies, alongside its focus on chemistry and synthetic biology.

Unit DX is a scientific innovation centre, catering for start-ups, SMEs and industrial teams requiring flexible, high-spec lab space in a city centre location. Opened in May 2017, it is bringing scientists, academics, and entrepreneurs together to create a cluster of scientific excellence, enterprise, and collaboration. Unit DX was founded to assist in retaining Bristol’s world-class scientific talent and research, and works in partnership with the University of Bristol and SETsquared.

QLM Technology tackles the global problem of natural gas (methane) leaks from well-heads and pipeline transportation, which currently cost the gas industry up to $30B annually. QLM have developed a quantum sensing solution capable of remotely detecting and quantifying the lowest leak rate required by the industry, out to a 150-metre operational distance. This brings a 10-fold sensitivity improvement over our closest competitor, which enables a significant performance improvement in scanning and imaging capabilities. The technology is lightweight, low-powered and capable of delivering an unprecedented 30 miles per hour surveying speed when mounted on a drone.