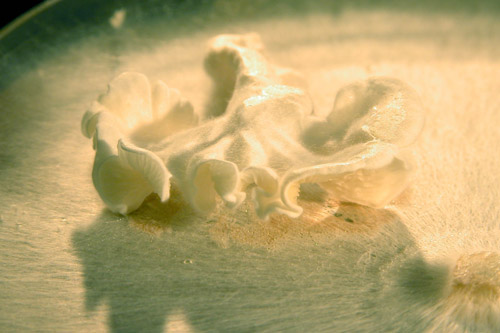 Combining the innovations of synthetic biology with biology and chemistry, a team of scientists at the University of Bristol have generated a brand-new platform that will allow the production of desperately needed brand-new antibiotics.

With resistance growing to existing antibiotics, there is a vital and urgent need for the discovery and development of new antibiotics that are cost effective.

In a new paper published today in Nature Communications, the Bristol team report the genetic characterisation of the steps involved in pleuromutilin biosynthesis through heterologous expression and generate a semi-synthetic pleuromutilin derivative with enhanced antibiotic activity.

This was achieved by taking the complete genetic pathway for pleuromutilin production, containing seven genes, from the mushroom, and rebuilding it in the industrially useful filamentous fungus Aspergillus oryzae, traditionally used to make soy sauce.

This then generated a unique platform of Aspergillus lines with combinations of the pathway genes to allow new compounds to be synthesized.

Professor Chris Willis, from the School of Chemistry, said: “This is a classic case where nature has produced something really useful, but combining nature with chemistry through a synthetic biology approach we are able to make things even better.”

These new compounds are some of the only new class of antibiotics to join the market recently as human therapeutics.

Furthermore, with their novel mode of action and lack of cross-resistance, pleuromutilins and their derivatives represent a class with further great potential, particularly for treating resistant strains such as methicillin-resistant Staphylococcus aureus (MRSA) and extensively drug resistant tuberculosis (XTB).

Professor Gary Foster from the School of Biological Sciences who led the team, with Dr Andy Bailey, added: “This research is very exciting as it also paves the way for future characterization of biosynthetic pathways of other basidiomycete natural products in ascomycete heterologous hosts.

“Many mushrooms have never even been examined and act as an untapped resource.

“The platform also opens up new possibilities of further chemical modification for the growing class of potent antibiotics.”