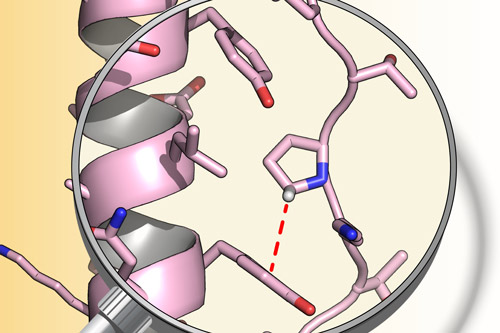 This research will help to design small proteins and small molecules that could be the basis for future biotechnologies and medicines.

A team of chemists and biochemists from the Bristol BioDesign Institute have designed a new protein structure.

This is much simpler than most naturally occurring proteins, which has allowed the scientists to unpick some of the molecular forces that assemble and stabilise protein structures. The work is published in the journal Nature Chemical Biology.

Proteins are the workhorses of biology.  For example, they help convert light energy into sugar in plants, transport oxygen from our lungs to our muscles, and combine sugar and oxygen to release energy to make the muscles work.  To perform these tasks, proteins must adopt specific 3D structures, called protein folds.

In chemical terms, proteins are polymers, or strings of amino acids, much like the beads of a necklace.  There are 20 different chemistries of the amino-acid building blocks.

It is the combination of these along the protein string that determines how a protein folds up into its functional 3D shape.  Despite decades of effort, scientists still don’t understand how biology achieves this protein-folding process, or, once folded, how protein structures are stabilised.

To address this problem, the Bristol team have combined two types of protein structure—called an a helix and a polyproline II helix—to make a stripped down, or simplified protein called a miniprotein.

This is basic science with the simple aim of seeing how small a stable protein structure can be.  It is important, as natural proteins are usually very large and cumbersome structures, which are currently too complicated for chemists and biochemists to dissect and understand.

In the miniprotein, which the team call 'PPa', the two helices wrap around each other and their amino acids contact intimately in what are termed ‘knobs-into-holes’ interactions.  This was expected, indeed the team designed PPa from scratch based on their understanding of these interactions.

Dr Emily Baker, who led the research in Professor Dek Woolfson’s laboratory, decided to change some of the amino acids in these knobs-into-holes interactions to non-natural amino acids, which the wonders of modern protein chemistry allow.

By doing this, Emily discovered that as well as the expected forces that hold proteins together, known as hydrophobic interactions, other more-subtle forces were at play in stabilising the miniprotein structure.

Chemists know these small forces as CH–pi interactions, and they are found throughout the chemical world.  When Drs Gail Bartlett and Kieran Hudson, also from the Bristol team, searched the thousands of natural protein structures available they found many examples of these CH–pi interactions.

Moreover, the proteins that they occur in play roles in different biological process, many of which are associated with disease.  This presents potential targets for new drugs, and the CH–pi interactions may provide a valuable new route into developing these.

Dr Baker explained: "Our work has implications not only for understanding the basic science of protein folding and stability, but also for guiding the design and engineering of new proteins and drug molecules."

Professor Woolfson added: "This is precisely what the new Bristol BioDesign Institute is about.  We aim to deliver the very best basic science.  In this way, we will open unforeseen routes to translating fundamental science into biotechnology and biomedical applications."