Energy efficiency is important to wireless and broadcast networks 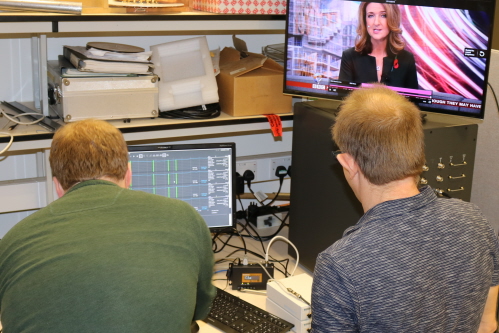 John Boyer and Peter Bagot in the lab University of Bristol

When a digital TV system operates with excess transmit power there is no benefit for either the user or broadcaster. New research has found that by deploying a spatially adaptive broadcast system, broadcast powers can be reduced by up to 35 per cent, reducing carbon emissions and saving money.

A spatially adaptive broadcast system allows the broadcaster to adapt the geographical coverage from the transmitter based on what is actually happening in real-time to the radio frequency emissions. This is similar to what happens in a cellular network, which adapts to the needs and locations of subscribers.  Mobile phones constantly change their transmit power based on the users location and distance to the base station and this can increase the energy efficiency and battery life of the handset.

The research by engineers at the University of Bristol, and published in the IEEE Transactions on Broadcasting, has shown that the energy efficiency of broadcast TV can be improved if the broadcaster optimises in real-time both the signal strength and directivity of the broadcast transmission.

Broadcast TV is now digital, which means when the signal strength drops below a certain limit, the TV signal fails and the picture is completely unwatchable. During network planning, the network engineer has to be especially careful and assume the worst case scenario for broadcast, because if signal strength drops below the operational limit then no reception can be achieved. However, being significantly above the operational limit is considered a waste of energy as there is no benefit to the viewer. If the network engineer had live access to the received signal levels at the users’ premises’ then the entire system could adapt and be made significantly more energy efficient.

Internet enabled TV devices are now capable of relaying signal strength information back to the broadcaster in order to improve energy efficiency.

This study has shown that further improvements can be made to the broadcast network that maintain the same level of service but use much less electricity. The researchers found that by deploying a spatially adaptive broadcast system, the broadcast power could be reduced by up to 35 per cent, resulting in reduced carbon emissions and significant financial savings.

Mark Beach, Professor of Radio Systems Engineering in the Department of Electrical and Electronic Engineering and Manager of the EPSRC Centre for Doctoral Training in Communications (CDT), remarked: "Peter was one of the students in the first cohort of researchers in the CDT. It is most rewarding to see this collaborative work with BBC research and development producing such high-quality research."

About the Communication Systems & Networks (CSN) Group
The CSN Group was formed in 1985 to address the research demands of the fixed and wireless communications sectors.  It combines fundamental academic research with a strong level of industrial application. The Group has well-equipped laboratories with state-of-the-art test and measurement equipment and first-class computational facilities.

Recently the Group has joined forces with the University's High Performance Networks (HPN) Group and the Photonics Research Group to form the Smart Internet Lab.