Is there a link between telomere length and cancer? 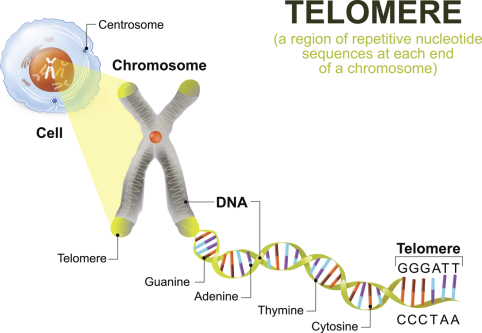 Illustration of a telomere istock

Telomeres are regions of repetitive DNA at the end of human chromosomes, which protect the end of the chromosome from damage. Whilst shorter telomeres are hypothesized biological markers of older age and have been linked to many diseases, including cancer and cardiovascular diseases, whether these associations are causal is unknown.

A team from Bristol Population Health Science, a new specialist research institute at the University of Bristol, investigated the effect of longer telomeres on the risk of 83 diseases, including cancer, cardiovascular diseases, diabetes, psychiatric diseases and autoimmune diseases in 420,081 cases and 1,093,105 controls, using a novel approach known as “Mendelian randomization”.

Dr Philip Haycock, Cancer Research UK Population Research Fellow from the MRC Integrative Epidemiology Unit in the School of Social and Community Medicine and lead author, said: “These findings suggest that potential clinical applications based on telomere length may have to consider a trade-off in risk between cancer and other diseases. For example, a number of companies offer telomere length measurement services to the public, claiming that shorter telomeres are a general indicator of poorer health status and older biological age and that such information can be used to motivate healthy lifestyle choices in individuals. However, the conflicting direction of association between telomere length and risk of cancer and other diseases suggests that such services to the general public may be premature”

Dr Kathreena Kurian, Reader in Brain Tumour Research and Consultant Neuropathologist from the School of Clinical Sciences and co-author, added: “Our research has shown that having longer telomeres might increase the risk of some cancers, but reduce the risk for some non-neoplastic diseases, including cardiovascular disease.

“In particular, having genetically-predicted longer telomeres appears to give the highest relative risk for the brain tumour glioma compared with other cancers.  This is important because the risk factors for glioma are not well understood at the moment. Currently the well-recognised risk factors for glioma include having had previous radiotherapy and rare cancer genetic syndromes such as Li-Fraumeni syndrome.”

The research suggests that it is likely that longer telomeres increase the risk for several cancers but reduce risk for other diseases, including cardiovascular diseases.

The study’s approach could be useful for studying other hypothesized causes of human diseases. The research team has therefore created a freely available platform for other researchers called MR-Base, which can be used to support similar studies in future.

Bristol Population Health Science is an internationally-leading centre for research into the determinants, consequences, prevention and treatment of ill-health.  It is one of seven newly created Specialist Research Institutes designed to reflect the University of Bristol’s strength and depth in key specialisms. They catalyse research collaboration and partnership, providing outstanding academic training. Our institutes position Bristol among the world’s leading research-intensive universities and destinations for students and staff internationally.

Bristol Population Health Science encompasses many fields from basic discovery science in molecular and genetic epidemiology to innovative public health, primary care and clinical trials and policy-influencing activities. Our multi-disciplinary community stretches across several schools and faculties within the University and tackles a wide range of health issues, including cardiovascular disease, cancer, mental health, anti-microbial resistance, respiratory health and many others.