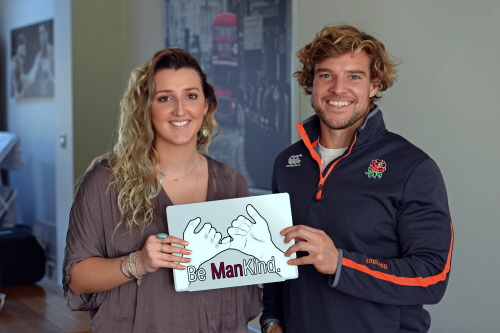 A hard hitting campaign, Be ManKind, launched this week to address the stigma surrounding male mental health and suicide through the medium of photography.

University of Bristol student, Olivia Huxtable, is the force behind the campaign which features England and Great Britain rugby 7s captain and University of Bristol alumni, Tom Mitchell, alongside other sportsmen. It aims to break down the social barriers many men encounter when it comes to emotional expression.

The portrait album, which includes quotes and phrases, provides an engaging way to encourage University of Bristol staff and students to share their feelings and seek support, whether that be from family, friends or a professional.

The thought-provoking photography showcases candid and contrasting expressions of the males when discussing their emotions or experiences of mental health.  The photos, taken by local photographer Jack Willingham, are edited together in a diptych so it appears that two 'sides' of the men are sat at the same table.

The campaign has largely used students and staff engaged in sport in order to overturn assumptions of 'lad' culture which surround it, as many men encounter emotional struggles or mental health issues at some stage in their lives.

Olivia, who is in her second year of a History degree, said: "I wanted this campaign to highlight that a casually asked 'how are you?' usually only has one socially acceptable response; a positive one. I urge people to reject this norm and be more alert to the mental and emotional wellbeing of those around them. It is vital to break down any sense of shame surrounding mental health. Suicide is the single biggest killer of men under the age of 45, my hope is that if people feel able to express themselves and seek help earlier, that this tragic statistic might be improved."

Tom Mitchell said as part of the campaign: "We can often feel pressure to be or act a certain way. Do your best to ignore these pressures, they are not as real as they might appear. Be kind to others, be kind to yourself."