Cycling gold, bits to qubits and the defect game 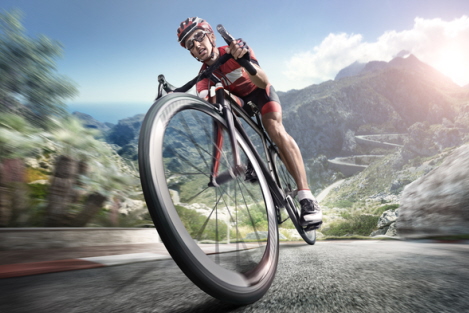 How engineering is helping track cyclists reach for gold, harnessing the power of quantum computers and the hidden world of engineering safety testing are three research projects University of Bristol academics will be showcasing at a free festival to celebrate the most exciting cutting-edge science and technology in the UK.

Members of the public will be able to explore these interactive exhibits at the Royal Society Summer Science Exhibition 2017 in London, running from Tuesday 4 to Sunday 9 July

The visionary science and technology event provides the public with a unique opportunity to interact with scientists and ask questions about their work. The exhibition involves a highly competitive selection process, with only 22 research groups chosen to host an exhibit – meaning the UK’s leading scientific research is collated in one place.

Professor Stuart Burgess and his research team will demonstrate in their exhibit ‘Engineering cycling gold’ how different parts of an Olympic track bike work and how engineering is helping to produce the fastest racing bikes in the world.

The researchers have developed one of the world’s most accurate test rigs for measuring the efficiency of bicycle chain transmissions.  Using the rig and their expertise, they carried out tests to help the Great Britain Cycling Team measure and optimize the efficiency of their chain drive for track bikes and BMX bikes, which enabled Team GB cyclists to win 11 medals in the Olympic velodrome at Rio 2016.

Members of the public will be able to learn about the very latest developments in bicycling science and get hands-on experience of bicycle testing.

Stuart Burgess, Professor of Engineering Design in the Department of Mechanical Engineering, said: “Making cycling more efficient encourages more people to get out of their cars and get on their bikes.  Beyond the world of cycling, our research has far reaching implications - many applications, from motorcycles and cars through to manufacturing plants, use chain drive systems. By making these systems more efficient, less energy will be consumed, reducing energy waste and helping our environment.”

Quantum technologies, which encompass quantum computation, metrology and communication, are expected to revolutionise society and could hold the key to solving complex health and environmental problems.

The ‘Quantum computing: bits to qubits’ exhibit will enable members of the public to be a scientist and carry out an experiment to demonstrate the difference between ‘classical’ and ‘quantum’ behaviour.

Conventional computers store information using bits that can either be 0 or 1. A quantum computer uses quantum bits, or qubits for short, which make use of the mysterious power of quantum mechanics. Even very small quantum computers will soon be able to solve problems far beyond the reach of the largest supercomputers today.

The University’s Quantum Engineering Technology Labs (QET Labs) is developing ground-breaking technologies using single particles of light, known as photons. These devices create, control and measure these photons to process complex information. By using techniques from the semiconductor industry, the researchers have designed and fabricated the first quantum photonic microchips.

John Rarity, Professor of Optical Communication Systems and Director of QET Labs, said: “These integrated devices, which are smaller than a fingernail, will form part of the next generation of quantum computers and these computers are likely to have a huge impact on cyber security, drug design and even machine learning.”

The third exhibit about the hidden world of engineering safety testing will demonstrate how engineers play a vital role by testing engineering structures such as planes, trains and power stations to ensure they are safe.

‘Safe and sound’ will take visitors into a mock-up of a power station and show them how to use state-of-the-art equipment to test the structure is safe. The conditions are challenging, as it’s hot and the space is cramped. It’s also a race against the clock as the structure can only start to operate once it’s been declared safe.

The exhibit will unveil the world’s first ever magnetic camera, which uses the way cracks disturb magnetic fields to detect them. This could also have applications in airport security. A large animation will also show how ultrasonic waves can travel along pipelines to detect corrosion.  This has applications in testing the many millions of kilometres of pipes around the world used to carry oil and gas across deserts and deep beneath the ocean.

Bruce Drinkwater, Professor of Ultrasonics and Head of the Ultrasonics and Non-Destructive Testing (UNDT) research group, said: “Scientists and engineers that test structures like planes, trains and power stations work to the highest standards in extreme conditions and without non-destructive testing today’s modern world would grind to a halt.

“Our exhibit also showcases how this cutting-edge technology has progressed from fundamental science to commercial products, which leads to jobs and tangible benefits to society. We will show technology from a recent university spin-out called Inductosense, which is already starting to make an impact by making this testing faster and easier.”