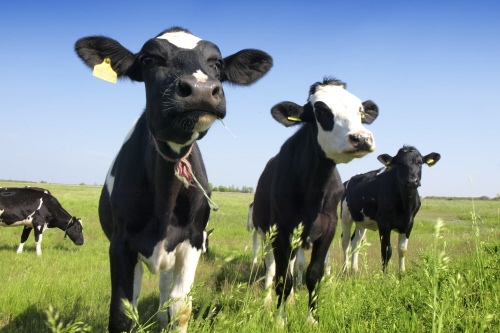 Evidence suggests the frequent use of certain antimicrobials (AM) in food-producing animals may reduce their effectiveness as treatments for both animals and humans. Researchers at the University of Bristol’s School of Veterinary Sciences are finding novel ways to address these concerns, working with farmers to empower them to develop policies to promote more responsible use of medicines on farms.

The new stewardship policy – facilitated by the AMR Force research group - is already informing industry and legislative bodies, allowing them to deliver real, on-farm changes while maintaining or improving herd health and welfare.

While high use of AMs in food-producing animals may be associated with intensive pig and poultry production, pressures to use medicines more responsibly are increasing in all sectors, and the use of AMs - including those used to treat serious infections in humans - is a growing focus.

The process to create a policy - led by Dr Kristen Reyher, Senior Lecturer in Farm Animal Science and Ms Lisa van Dijk, Project Manager and PhD student, both at the School of Veterinary Sciences - enabled groups of dairy farmers to develop an AM livestock health policy to address the challenge of more responsible use of medicines on farms.

The paper, published in Zoonoses and Public Health, explains the pilot process in which two groups of dairy farmers worked together to develop their own AM stewardship policy, leading to changes in farming practice and reduced AM use.

Dairy farmers, their veterinarians and researchers worked together with the aim of developing a functional and implementable AM policy which was producer-led and benefitted the relevant supply chain. The policy development process began with two dairy producer groups consisting of 25 organic producers and 48 conventional producers supplying one of the UK’s major retailers. It was a focused initiative driven by the producers, but also addressed retailer and consumer needs.

Dr Kristen Reyher, from the School of Veterinary Sciences, said: "Although AMs are used in food-producing animals, farmers have repeatedly told us - and shown us - that they are willing and able to address medicine use on farms and are interested in using AMs responsibly. Participatory approaches like the ones used in this project provide ways for farmers to respond to the public’s concern about AM use in a very real and constructive way.

"Although many producers were already strict in their AM use, including organic farmers, almost 60 per cent believed they could make changes to their use of medicines after taking part in the policy development process."

A series of meetings and workshops was held between May and August 2015 to create and develop the on-farm AM stewardship policy that identifies critical points to reduce AM use without compromising animal health and welfare.

The process provided a unique opportunity for collaboration and discussion between farmers, veterinarians, industry partners and researchers, and encouraged shared learning for everyone involved.

The research is an initial step towards a better understanding of how participatory methods with producers can be applied in the UK and more widely. This study serves as a pilot for promoting more responsible use of AMs in other livestock species using such methods.

'Participatory Policy Making by dairy producers to reduce antimicrobial use on farms' by Lisa van Dijk et al. in Zoonoses and Public Health.

Antimicrobial resistance (AMR) research at the University of Bristol’s School of Veterinary Sciences is promoted and facilitated by the AMR Force, initiated and led by Dr Kristen Reyher. We work both in the South West, nationally and internationally, and are interested in decreasing antibiotic use while improving animal health through a plurality of approaches addressing differing styles and attitudes. Our group has previously been funded by public funders (Defra, University of Bristol) and currently stewards over £1.7 million of funding from Research Councils UK (BBSRC, EPSRC, MRC, NERC) as well as various industry (AHDB Dairy, MSD Animal Health, Zoetis UK, WD Farmers, Coombe Farm), charity funders (Soil Association, The Langford Trust) and international bodies (EU H2020, Formas – Sweden).

We are uniquely placed to combine our veterinary focus with close collaborations, including those with social science interests, animal welfare research and policy-making concerning animals, animal welfare and veterinary practice. We are presently performing medicines audits and clinical governance on antibiotics in all Langford Veterinary Services clinics and advise for a number of other practices nationally. We are heavily involved in influencing medicines use UK-wide and in national control programmes on farms. We also work closely and have collaborations with the BristolBridge AMR project and with a number of basic and social science researchers at the University of Bristol and the University of Exeter.