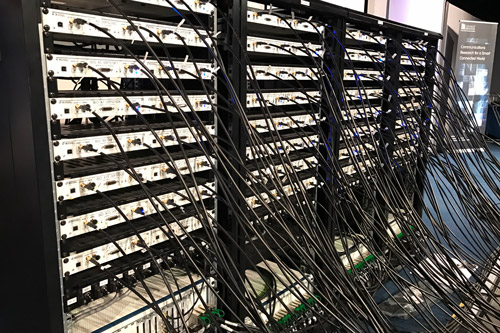 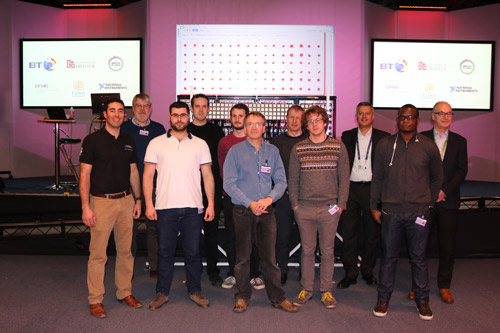 The quest for highly efficient 5G wireless connectivity has been given a boost thanks to a collaboration between a team of 5G engineers from the Universities of Bristol and Lund, National Instruments (NI), and BT, one of the world’s leading providers of communications services.

The research team has undertaken field trials of a massive MIMO system at the BT Labs in Adastral Park, Suffolk. The trials were conducted in a large indoor hall mimicking a stadium environment and outdoors within the Adastral Park campus.

The goals were to test massive MIMO spatial multiplexing indoors and improve the understanding of massive MIMO radio channels under mobile conditions with untethered devices. While carrying out these field experiments, the team obtained  promising results indicating that this technology could offer spectrum efficiency figures in excess of the 100 bits/s/Hz mark, improving upon the capacity of today’s long term evolution (LTE) systems by ten times.

It is expected that techniques such as massive MIMO, which offers full spatial multiplexing – where multiple data streams are transmitted at the same time and on the same radio channel –will become a crucial part of future 5G networks; the next generation of mobile technology.

The research team, consisting of five PhD students from Bristol’s EPSRC Centre for Doctoral Training in Communications and a researcher from Lund University, under the leadership of Professor Mark Beach, worked with the BT research team, led by Ian Mings, to assess the performance of a 128 element Massive MIMO system operating at 3.5 GHz at BT’s Adastral Park campus.

Initial experiments took place in BT’s large exhibition hall and used 12 streams in a single 20MHz channel to show the real-time transmission and simultaneous reception of ten unique video streams, plus two other spatial channels demonstrating the full richness of spatial multiplexing supported by the system.

The system was also shown to support the simultaneous transmission of 24 user streams operating with 64QAM on the same radio channel with all modems synchronising over-the-air. It is believed that this is the first time such an experiment has been conducted with truly un-tethered devices, from which the team were able to infer a spectrum efficiency of just less than 100bit/s/Hz and a sum rate capacity of circa two Gbits/s in this single 20MHz wide channel.

In addition to the indoor trials, a series of outdoor experiments were conducted with the array at a height of around 20 metres. This enabled far field array characterisation, multi-element handset performance as well as experiments to improve the understanding of the massive MIMO radio channel under mobile conditions to be carried out.

Mark Beach, Professor of Radio Systems Engineering in the Department of Electrical and Electronic Engineering, Manager of the EPSRC CDT in Communications and a member of the Smart Internet Lab, explained: "We are delighted to be collaborating with BT.  Massive MIMO is a key technology for 5G and the research team's achievements last year with massive MIMO arrays, which are cellular base stations with more than 100 antennas, demonstrates that this technology could deliver ultra-fast data rates to high densities of smartphones and tablets."

Professor Tim Whitley, Managing Director, Research and Innovation at BT, added: "The BT Labs have a long history of pioneering wireless research, and with the acquisition of EE, we’re excited to once again be at the forefront of mobile technology development. Massive MIMO has the potential to significantly boost available data rates in future 5G mobile networks, and we’re pleased to be able to explore that potential with leading academics in the field at the University of Bristol."

The experimental system uses the same flexible SDR platform from NI that leading wireless researchers in industry and academia are using to define 5G.  To achieve accurate, real-time performance, the researchers took full advantage of the system's FPGAs using LabVIEW Communications System Design and the recently announced NI MIMO Application Framework. As lead users, both the Universities of Bristol and Lund worked closely with NI to implement, test and debug this framework prior to its product release. It now provides the ideal foundations for the rapid development, optimization and evaluation of algorithms and techniques for massive MIMO.

The state-of-the-art platform was made possible thanks to hardware provided by Bristol Is Open, a joint venture between the University and Bristol City Council that aims to make Bristol the first open programmable city in the world.

Spectrum and power efficient wireless communications are core to Bristol University's Communication Systems and Networks (CSN) Group and the EPSRC Centre for Doctoral Training (CDT in Communications as well as to the Department of Electrical and Information Technology at Lund University.

The researchers are now processing the data sets and aim to publish their findings in leading journals in the near future as well as adding enhancements to the system in preparation for further trials.

The University of Bristol has been collaborating with the University of Lund for several years on wireless research topics. Both universities have contributed to the development and testing of this software suite, as well as writing additional customisations to be used here at BT.

About the Communication Systems & Networks (CSN) Group
The CSN Group was formed in 1985 to address the research demands of the fixed and wireless communications sectors.  It combines fundamental academic research with a strong level of industrial application. The Group has well-equipped laboratories with state-of-the-art test and measurement equipment and first-class computational facilities.

Recently the Group has joined forces with the University’s High Performance Networks (HPN) Group and the Photonics Research Group to form the Smart Internet Lab.

About the Smart Internet Lab
The Smart Internet Lab, is an interdisciplinary activity that uniquely brings together more than 200 experts across the boundaries of communications and digital living research. Our research aims at addressing a key limitation with the current Internet, its inability to scale enough to support the demand and rapid changes in the way we consume Internet services.

We provide a holistic approach to hardware and software co-design used to solve critical problems in the global Internet evolution. This is due to the fact that we are one of very few Universities that have expertise, and combined thinking, across optics, networks and wireless technologies, enabling us to bring together end-to-end, wired-wireless network design and optimisation.

As a hub for internet research, we challenge the complexity of tomorrow’s world by fusing research expertise and innovation in a range of areas such as smart cities, autonomous vehicles, Internet of Things (IoT) and eHealth.

About Lund University
Lund University seeks to be a world-class university that works to understand, explain and improve our world and the human condition. The University is ranked as one of the top 100 in the world and tackle complex problems and global challenges and work to ensure that knowledge and innovations benefit society. The University has 42,000 students and 7,680 employees and provides education and research in engineering, science, law, social sciences, economics and management, medicine, humanities, theology, fine art, music and drama.

About National Instruments
Since 1976, NI has made it possible for engineers and scientists to solve the world’s greatest engineering challenges with powerful platform-based systems that accelerate productivity and drive rapid innovation. Customers from a wide variety of industries – from healthcare to automotive and from consumer electronics to particle physics – use NI’s integrated hardware and software platform to improve the world we live in.

About BT
BT’s purpose is to use the power of communications to make a better world. It is one of the world’s leading providers of communications services and solutions, serving customers in 180 countries. Its principal activities include the provision of networked IT services globally; local, national and international telecommunications services to its customers for use at home, at work and on the move; broadband, TV and internet products and services; and converged fixed-mobile products and services.  BT consists of six customer-facing lines of business: Consumer, EE, Business and Public Sector, Global Services, Wholesale and Ventures, and Openreach.

British Telecommunications plc (BT) is a wholly-owned subsidiary of BT Group plc and encompasses virtually all businesses and assets of the BT Group. BT Group plc is listed on stock exchanges in London and New York.

About Bristol Is Open
How cities work is changing. Bristol Is Open, a joint venture between Bristol City Council and the University of Bristol, is a research infrastructure to explore developments in software, hardware and telecom networks that enable more interaction between people and places and more machine-to-machine communication. The project uses a high performance software defined network as the city operating system, then internet of things platforms and big data analytics feed an emerging number of smart city applications. This is giving people more ability to interact, work and play with the city that they live in, and will help cities address some of the biggest challenges of modern urban life. This is the Open Programmable City.