Fantastic eggs and where to find them 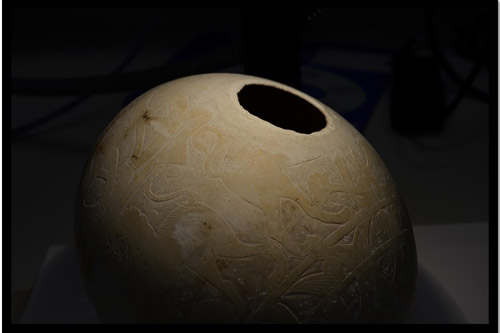 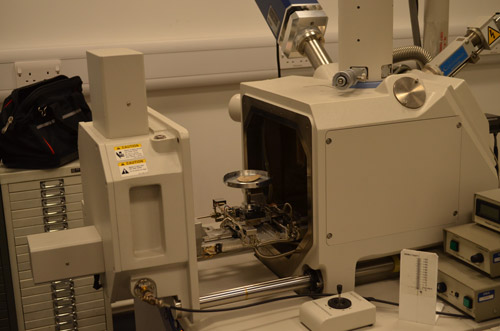 Ostrich eggshell fragment ready to be analysed under the Scanning Electron Microscope. Photo by A. Fletcher, by permission of Trustees of the British Museum 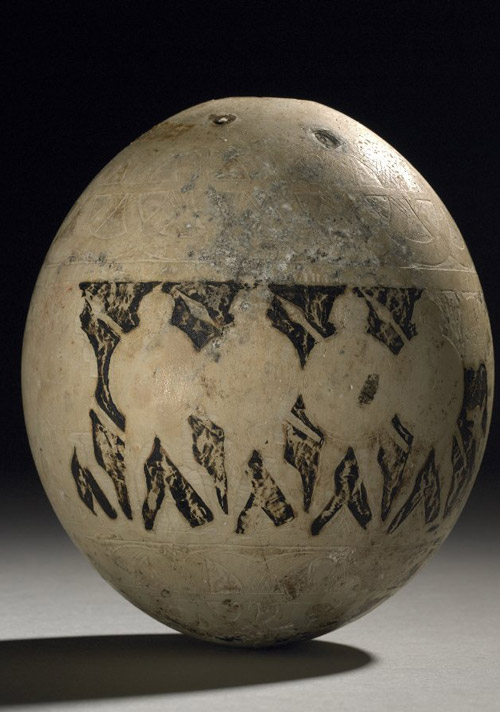 Archaeologists and scientists from the Universities of Bristol and Durham and the British Museum are using cutting edge technology to crack a conundrum surrounding the ancient trade in ostrich eggs.

Decorated ostrich eggs were traded as luxury items from the Middle East to the Western Mediterranean during the Iron Age (1200-300 BC).

Several beautiful examples – both intact and in fragments – have been part of the British Museum's collection since the nineteenth century.

The eggs were engraved, painted and occasionally embellished with ivory, precious metals and faience fittings. They were found in elite contexts from Spain to Iraq.

The research team wants to find out where the eggs were laid and whether the birds laying them were wild or captive.

Dr Tamar Hodos, Reader in Mediterranean Archaeology at the University of Bristol's Department of Archaeology and Anthropology, said: "Apart from noting their presence as unusual vessels in funerary and celebratory settings, surprisingly little is known about where they actually come from or who decorated them, much less how they circulated."

Using the British Museum's collection of ostrich eggs from the Mediterranean and Middle East, isotopic analyses of strontium, oxygen and carbon in the eggshells are being used to investigate where the eggs were laid and whether the ostriches were captive or wild, by detecting what and where the mother was eating and drinking during ovulation.

Detailed study of the eggshells’ intricate decoration via scanning electron microscopy will allow the research team to compare carving techniques, helping them understand how they were created.

Dr Alexandra Fletcher, Curator in the Middle East Department at the British Museum, said: "We really want to find out more about how this trade worked. Were eggs gathered from nests in the wild, given that this was a potentially dangerous activity? Or is it possible that ostriches were kept in captivity to ensure the luxury trade had a supply of eggs readily available?"

The question of captivity is an important one. Images on objects such as cylinder seals from the same period show ostriches as dangerous and fierce creatures.

One has an ancient king strangling an ostrich while the bird kicks him in the stomach, for example. It seems, however, that some members of these ancient societies were adept at catching and handling dangerous beasts.

The famous Assyrian reliefs at the British Museum show that royal 'lion hunts' were staged affairs. Captured lions were released from cages directly into the path of their hunters. Could the ostriches also have been captive creatures?

It is hoped that the information held in the ostrich eggshells themselves will tell us more about how they were obtained, decorated and traded, which will in turn reveal more about both the people who supplied these luxury goods and those who coveted them.

Founded in 1753, the British Museum was the first national public museum in the world. From the outset it was a museum of the world, for the world, and this idea still lies at the heart of the Museum’s mission today. The collection tells the stories of cultures across the world, from the dawn of human history, over two million years ago, to the present.

Objects range from the earliest tools made by humans and treasures from the ancient world to more recent acquisitions from Africa, Oceania and the Americas, the Middle East, Asia and Europe, as well as the national collections of prints and drawings, and coins and medals. In addition to work in London, the Museum takes part in an extensive programme of loans and tours, both across the UK and throughout the world.

The project was sponsored by the Gerda Henkel Foundation, the British Museum and the University of Bristol.