What dinosaurs' colour patterns say about their habitat 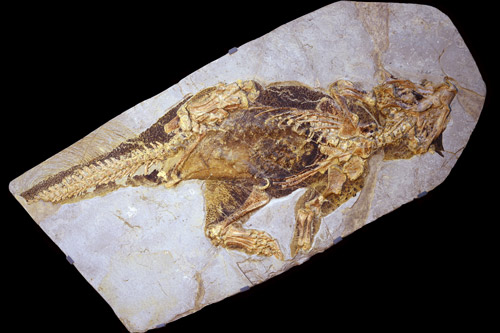 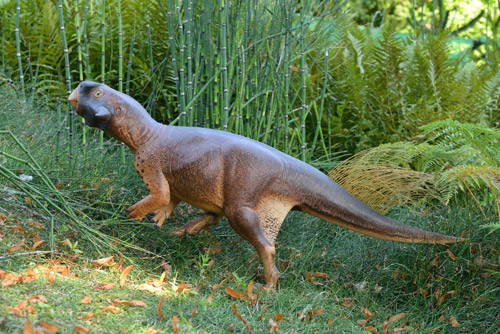 After reconstructing the colour patterns of a well-preserved dinosaur from China, researchers from the University of Bristol have found that the long-lost species Psittacosaurus (meaning "parrot lizard", a reference to its parrot-like beak) was light on its underside and darker on top.

This colour pattern, known as countershading, is a common form of camouflage in modern animals.

The study published today in Current Biology led the researchers to conclude that Psittacosaurus most likely lived in an environment with diffuse light, such as in a forest, and has produced the most life-like reconstruction of a dinosaur ever created.

Dr Jakob Vinther from the Schools of Earth Sciences and Biological Sciences, said: "The fossil, which is on public display at the Senckenberg Museum of Natural History in Germany, preserves clear countershading, which has been shown to function by counter-illuminating shadows on a body, thus making an animal appear optically flat to the eye of the beholder."

Behavioural ecologist Professor Innes Cuthill from the School of Biological Sciences, added: "By reconstructing a life-size 3D model, we were able to not only see how the patterns of shading changed over the body, but also that it matched the sort of camouflage which would work best in a forested environment."

Countershading most likely served to protect Psittacosaurus – an early relative of the triceratop - against predators that use patterns of shadow on an object to determine shape, just as humans do.

Dr Vinther realised that structures previously thought to be artifacts or dead bacteria in fossilized feathers were actually "melanosomes", small structures that carry melanin pigments found in the feathers and skin of many animals.

In some well-preserved specimens, such as the Psittacosaurus the researchers worked on in the new study, it's possible to make out the patterns of preserved melanin without the aid of a microscope.

Professor Innes and colleagues at Bristol had also been exploring the distribution of countershading in modern animals. But it was no easy matter to apply the same principles to an extinct animal that had been crushed flat and fossilized.

To explore this idea further they teamed up with local palaeoartist, Bob Nicholls in order to reconstruct the remarkable fossil in to a physical model which, they say, is the most scientifically accurate life-size model of a dinosaur with its real color patterns.

Days of careful studies of the fossil, taking measurements of the bones, studying the preserved scales and the pigment patterns, with input on muscle structure from Bristol palaeontologists Professor Emily Rayfield and Dr Stephan Lautenschlager, led to months of careful modelling of the dinosaur.

Bob Nicholls said: "Our Psittacosaurus was reconstructed from the inside-out. There are thousands of scales, all different shapes and sizes, and many of them are only partially pigmented.  It was a painstaking process but we now have the best suggestion as to what this dinosaur really looked like."

In order to investigate what environment the psittacosaur had evolved to live in, Dr Vinther, Bob Nicholls and Professor Cuthill took another cast of the model and painted it all grey.

They then placed it in the Cretaceous plant section of Bristol Botanic Garden and photographed it under an open sky and underneath trees to see how the shadow was cast under those conditions.

By comparing the shadow to the pattern in the fossil they could then predict what environment the psittacosaur lived in.

Dr Vinther said: "We predicted that the psittacosaur must have lived in a forest. This demonstrates that fossil colour patterns can provide not only a better picture of what extinct animals looked like, but they can also give new clues about extinct ecologies and habitats.

"We were amazed to see how well these color patterns actually worked to camouflage this little dinosaur."

Psittacosaurus, which Professor Cuthill describes as "both weird and cute, with horns on either side of its head and long bristles on its tail" lived in the early Cretaceous of China and has been found in the same rock strata where many feathered dinosaurs have been found.

Those deposits also include evidence for a forest environment based on plant and wood fossils.

The researchers say that they'd now like to explore other types of camouflage in fossils and to use this evidence in understanding how predators could perceive the environment and to understand their role in shaping evolution and biodiversity.

The authors acknowledge support from the University of Bristol, National Geographic Waitts grant, the Faculty of Science of the University of Hong Kong, the Dr. Stephen S.F. Hui Trust Fund, and the Wissenschaftskolleg zu Berlin.