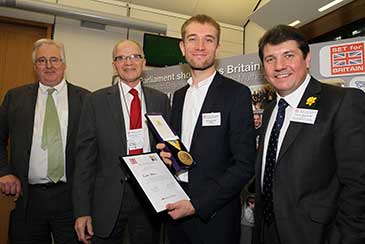 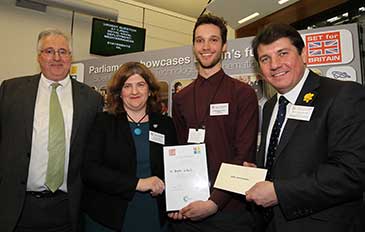 Researchers from the Schools of Physics and Chemistry at the University of Bristol won gold and bronze awards respectively in the final of the SET for Britain Exhibition, held in Westminster on 7 March.

Euan Allen, a PhD student in the Quantum Engineering Centre for Doctoral Training and a researcher in the Centre for Quantum Photonics (CQP), won a prestigious gold award for best poster and research in physics with ‘Quantum Enhanced Sensing: Pushing Photons to the Limit’.

Dr Bryden Le Bailly, until recently a postdoctoral researcher in the School of Chemistry’s Synthesis research group and now an editor at Nature Nanotechnology, won bronze in the chemistry category for ‘Building an Artificial G Protein-coupled Receptor’.

Both researchers presented their ground-breaking work to Members of Parliament at the annual SET for Britain poster competition and exhibition. Sponsored by Stephen Metcalfe MP, the event aims to foster greater engagement with early-stage researchers. Medals are awarded for the best research and results in an early-stage career alongside candidates’ ability to communicate their research to a general audience.

Allen is researching novel light sources for quantum sensing applications. Sensors and measurement devices are vital tools for technology, industry and science. An iPhone has eight sensors in it, a hospital is full of sensors (X-Ray, MRI, CT), and our knowledge of global warming would not exist without the data that sensors have provided. Light-based devices that use laser light are particularly useful. Examples include distance sensing in autonomous cars, detection of biological warfare agents and the measurement blood oxygen saturation. Allen’s work aims to use special light sources, based on the principles of quantum mechanics, which can be used to not only make current sensors better, but may produce a whole range of new devices that can be used across biological imaging, greenhouse gas sensing, and industry in general.

‘There were some fascinating posters on display and to have come away with the gold award was an amazing feeling,’ said Allen. ‘It was great to meet the other finalists and share my work with MPs. The opportunity to discuss my research with non-specialists was really constructive and I thoroughly enjoyed the experience.’

Dr Jonathan Matthews, Allen’s supervisor and Lecturer in CQP said: ‘SET for Britain is a fantastic event for Euan to be a part of and a terrific opportunity for Euan to showcase his research to policy makers. I am very excited about his project and I am very proud to be working with him.’

Dr Le Bailly’s work centres on molecular communication devices. Cell membranes protect the cells in the body from the outside environment. For the cells to function, they need to be fed information from the outside world. G protein-coupled receptors (GPCRs) are a family of proteins that sit in these membranes and relay signals to the inside of the cells. They are therefore vital to many of the functions in the human body, including our senses and our responses to hormones, pain and pleasure.  Dr Le Bailly designed and synthesised the first artificial mimic of a GPCR, capable of picking up chemical signals and communicating information through cell membranes. This provides a simple tool for scientists to interact with biology and could help to understand complex biological systems better. In the future this work may even be used to hack into cell signalling pathways, thereby ‘short-circuiting’ biology.

Dr Le Bailly said: ‘It is important for us as scientists to interact with the public, and in particular MPs, to explain the relevance of what we do at the cutting edge of research. SET for Britain was a great platform to do this and to discuss ideas with people who look at science from an entirely different perspective.’

Professor Jonathan Clayden, Dr Le Bailly’s former supervisor, said: ‘Bryden’s inventive ideas led to a real breakthrough in our work on artificial mimics of biological molecules: for the first time we can get them to work in real membranes, surrounded by water.  It’s a very exciting milestone in our research programme.’