Why it’s good to eat your greens 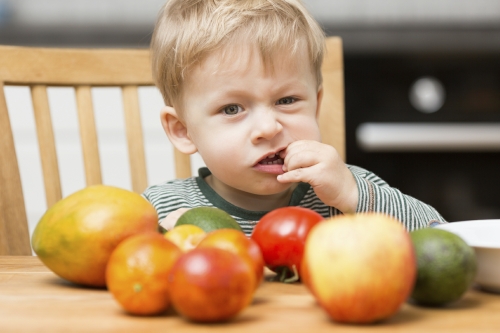 Research has found pre-school children whose parents considered them to be ‘picky eaters’ ate less dietary fibre, and were 30 per cent more likely to be constipated than those who were ‘never choosy’. The research, conducted on a subsample of about 6,000 participants in Children of the 90s, found about 10 per cent were picky eaters at the age of two, and this rose to 15 per cent at age three.

Picky eaters ate less dietary fibre than the UK recommended amount and more than a quarter (29 per cent) of them usually had hard stools. The food group the picky eaters avoided most was vegetables, eating about half the amount non-picky eaters did. They also ate less fruit, but this was less marked than for vegetables.

Even the children who weren’t picky eaters didn’t eat enough dietary fibre. Overall, about three quarters of the children surveyed consumed less than the amount of dietary fibre provisionally recommended for the age group in the UK by the Scientific Advisory Committee on Nutrition (about 15 g per day). This rose to 85 per cent of picky eaters not eating enough fibre. The main sources of fibre were bread (19 per cent), vegetables (16 per cent) and fruit (nine per cent).

The current UK recommended intake of fruit and vegetables for health is five portions a day. Based on the relative energy intake of a three-year-old child compared with an adult, this would equate to approximately 250 g a day (for example, one medium banana plus 10 grapes, four broccoli florets, six carrot sticks and four plum tomatoes over a day).

Having hard stools is one of the symptoms of constipation described in the UK’s National Institute for Health and Clinical Excellence (NICE) guidelines on constipation in children. Picky eaters were 30 per cent more likely to have hard stools than non-picky eaters.

In this study, the researchers found dietary fibre intake was associated with hard stools in all the children and particularly in the picky eaters, suggesting increasing fibre intake in the whole group could lead to improved bowel habits.

Dr Caroline Taylor, who led the research said: "Our research highlights the need to increase the fibre intake in the majority of children, particularly by increasing the amount of veg and fruit they eat.

"For parents of children who are picky eaters, the best advice is to try a combination of approaches, including offering small tastes of vegetables on many occasions to overcome neophobia (fear of what is new), showing a good example by eating vegetables themselves, and by having regular family mealtimes with the same meal offered to but not forced on everyone."

About Children of the 90s
Based at the University of Bristol, Children of the 90s, also known as the Avon Longitudinal Study of Parents and Children (ALSPAC), is a long-term health-research project that enrolled more than 14,000 pregnant women in 1991 and 1992. It has been following the health and development of the children and their parents in detail ever since and is currently recruiting the children and siblings of the original children into the study.

Declaration of interest: Kate Northstone and Pauline Emmett have from time to time received research funding and Pauline Emmett has received consultancy funding from Pfizer Nutrition Ltd, Plum Baby and Danone Baby Nutrition (Nutricia Ltd). Susan Wernimont is an employee of Nestle Nutrition. Caroline Taylor declares no conflicts of interest. The research reported in this paper was funded by Nestle Nutrition.