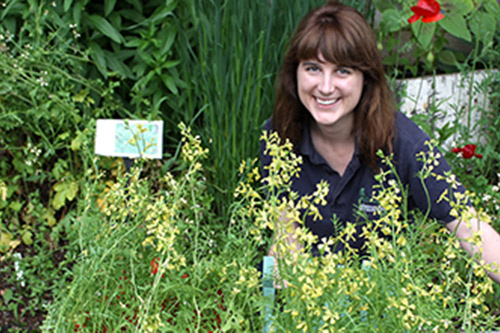 The countdown is over for staff at the University of Bristol Botanic Garden to find out which collection of seeds they have been growing spent time in space. As part of British astronaut Tim Peake's mission, two kilograms of rocket (Eruca sativa) seeds were sent to the International Space Station last year and were returned to Earth in March after six months on board.

Thousands of schools, children's clubs and societies, including the Botanic Garden, signed up for the national science experiment, Rocket Science, to grow seeds that have been in space together with identical seeds that have stayed on earth. The project, run by the Royal Horticultural Society’s (RHS) Campaign for School Gardening and the UK Space Agency, will help understand how science in space contributes to our knowledge of life on earth.

Two batches of seeds, a red and blue packet, were sent to the Botanic Garden in April, and trainee horticulturist Claire Cope has been monitoring the growth rate of the two batches of seed. Both packets are thriving and beginning to flower and yesterday (Wednesday 22 June) Tim Peake revealed which colour packet went to space.

Nick Wray, Curator of the Botanic Garden, said: "This is terribly exciting. None of us have ever handled something that has been into space. It is a wonderful opportunity to be involved in a science experiment and the closely guarded secret of which packet of seeds went to space has finally being revealed.

"The choice of plant rocket is an obvious one for such a long voyage, the peppery tasting herb is full of minerals and could be one of the first plants to be grown in space if and when expeditions are planned."

The project's aim is to learn more about the effects of weightlessness and radiation on seeds in order to develop plant varieties that can be grown on long space missions. It is also hoped the experiment will inspire participants to think scientifically and see the potential of future careers in STEM (science, technology, engineering, maths) and horticulture.

The plants which are now maturing at the garden will be planted into the Botanic Garden's Ballast Seed Garden display and in the Floating Ballast Seed Garden, which is housed on a disused concrete barge in Bristol's Floating Harbour. The permanent display of non-native plants is a living history of the city's trade and maritime past and the traditional maritime ship voyages are an obvious link to those of 21st century spaceship travel.

Visitors to both the Botanic Garden and the Floating Ballast Seed Garden will be able to see this edible annual plant, commonly known as salad rocket that has made a very long voyage.

About the Botanic Garden
The Botanic Garden has a strong evolutionary theme and cultivates over 4,500 plant species forming four core collections that illustrate plant evolution, plants from Mediterranean climates, useful plants and rare and threatened native plants to the Bristol area.

Star attractions include an amazing dell demonstrating the evolution of land plants including the dinosaurs' favourite plants: ginkgos, cycads, tree ferns, monkey puzzles and Wolly, the Wollemi Pine. Other delights include the Chinese and Western herb gardens and an inspiring display of plants illustrating floral diversity.

Admission is £4.50 adults; free to University staff and retired staff, Friends of the Botanic Garden, students and children under 16.

Teas served from the Devers room in the Holmes will be available on the terrace over Easter, at weekends until the end of May, seven days a week during June, July, August, and September and at weekends in October for garden visitors.

The garden is largely accessible for wheelchairs and mobility scooters with a designated path leading around the garden and glasshouses. Disabled toilet facilities are available on site.

Pre-booked guided tours of the garden for groups of ten upwards are available seven days a week. Please contact the garden for further information. There is a charge for the guide.