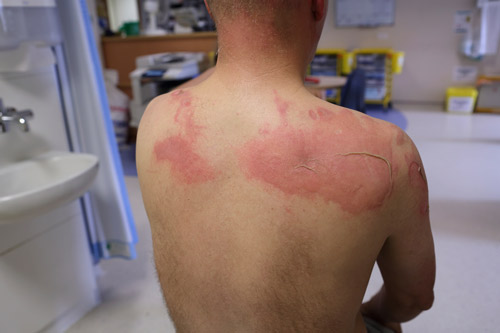 A major medical research campaign to achieve scar-free healing within a generation was launched in London today.

The Scar Free Foundation is a national charity directing world leading medical research into wound healing, scarring and the psychological effects of disfigurement, some of which is carried out at the University of Bristol. It announced the UK-led initiative to drive a global programme of research towards a medical revolution 'as important as the discovery of antibiotics or the development of modern anesthetics'.

Formerly the Healing Foundation, the charity supports the Cleft Collective Gene Bank at the University of Bristol – the world's largest cleft lip and palate DNA bio-resource. It also funds The Burns Collective, a networked programme of clinical research across three hospitals and four universities including Bristol, undertaking research into the prevention and clinical management of burns.

The launch, which saw the publication of the charity's Scar Free Strategy, was held at The Royal College of Surgeons of England, in London's Lincoln's Inn Fields, and was hosted by The Scar Free Foundation Trustees including former Marks & Spencer Executive chairman Stuart Rose and the Clinical Director of the NHS in England, Professor Sir Bruce Keogh.

Professor Maggie Dallman, Associate Provost of Imperial College London and one of the main authors of the strategy, said: "Scarring is common, costly and deeply affects those it touches as well as the people closest to them - while internal scarring can be life threatening."

"We welcome the launch of the Scar Free Foundation and look forward to further successful research collaboration."

Professor Dallman added: "The Scar Free Foundation is starting a globally significant movement, and we recognise the enormous challenge.  We will achieve scar free healing within a generation and make happen one of the most important new developments medicine and modern healthcare has ever seen."

Experts agree that the time has never been better to set out on this road to discovery than now:

The Scar Free Foundation is the only organisation in the world offering the leadership, collaboration and funding to deliver scar free healing.  It is focused on raising £24 million within the next five years from UK donors to kick start an internationally relevant programme of work.

The Scar Free Foundation is building on 15 years of research success in relevant areas.  The charity has already established the world’s largest single programme of research into the causes and effects of cleft lip and palate, a national network of burns research in the UK and significant investments in understanding the psychological effects and treatments relevant to disfiguring conditions.

The Scar Free Healing Research Strategy is a 40-page scientific, clinical and psychological road map detailing the work necessary over the next 20 years to achieve scar free healing.  It has been authored by a panel of UK-based world leaders in research including:

The charity, formerly The Healing Foundation, was established by the British Association of Plastic, Reconstructive and Aesthetic Surgeons, in 1999.  It was the brainchild of a plastic surgeon, Michael Brough, who had treated survivors of the 1989 Kings Cross Fire and recognised the need for a research organisation dedicated to improving the outlook for survivors of conditions or accidents that cause scarring.

The Scar Free Foundation is supported by the UK Armed Forces and currently supports research in partnership with the Royal Centre for Defence Medicine at Birmingham's Queen Elizabeth Hospital.

The Cleft Collective Gene Bank at the University of Bristol, which is the world's largest cleft lip and palate DNA bio-resource.

The Burns Collective, a networked programme of clinical research across four universities and three hospitals undertaking research into the prevention and clinical management of burns and a largescale study investigating the inflammatory and immune response to severe thermal injury in children and adults.

A ten-year commitment to work centred on tissue regeneration University of Manchester which has delivered high quality research, centred on the repair systems of animals that heal without scars and scientific and clinical research into non-healing diabetic wounds.