Chips with everything – as long as they're quantum 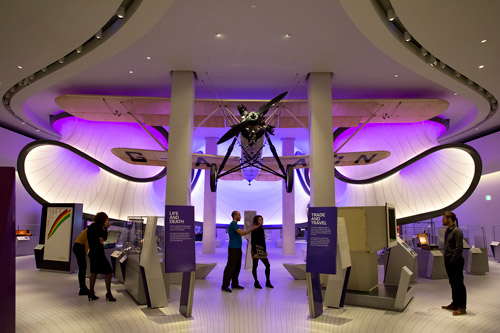 The interior of the Winton Gallery Nick Guttridge/Science Museum 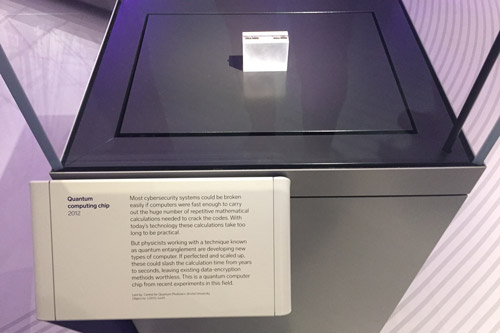 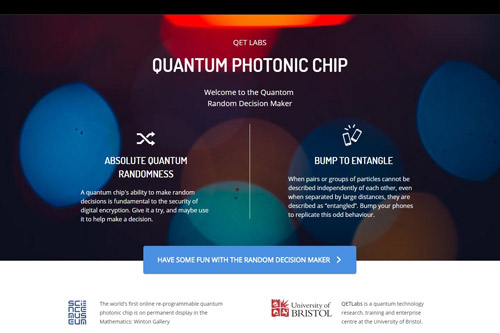 Front page of the app University of Bristol

The world's first programmable quantum photonic chip, created by scientists at the University of Bristol, will now be a part of a new permanent exhibition at the Science Museum which explores how mathematicians, their tools and ideas have helped to shape the modern world over the last 400 years.

Mathematics: The Winton Gallery brings the subject to life through remarkable stories, artefacts and design. It opens to the public today (Thursday, December 8).

More than 100 treasures from the Science Museum’s world-class science, technology, engineering and mathematics collections will help tell powerful stories about how mathematical practice has shaped, and been shaped by, some of our most fundamental human concerns – including money, trade, travel, war, life and death.

And to celebrate the launch of the new gallery, the University has created an online and free-to-use quantum decision maker application which can be downloaded from www.absolutelyrandom.org

This allows users to interact with their friends, simulating quantum entanglement between devices, sharing random decisions from any distance and even creating secret random codes. It was inspired by an episode of The Big Bang Theory in which Sheldon Cooper rolls dice to make decisions.

Professor of Quantum Photonics, Mark Thompson, led the development of the microscopic chip. He explained: "Quantum computers promise to be unimaginably powerful, and will allow us to tackle some of the hardest computing problems and could lead to new discoveries in pharmaceuticals, energy harvesting and artificial intelligence. Advanced quantum computers could one-day be used for code-breaking and deciphering messages."

Researchers at the University of Bristol’s Quantum Engineering Technology Laboratories (QETLabs) developed a tiny microchip based device which exploits the strange world of quantum mechanics and has provided public access to the device through Quantum in the Cloud online since 2013.

These devices use light to perform calculations, relying on the quantum properties of entanglement, superposition and the absolute randomness of quantum and is reproducible by no other means.

Professor Thompson added: "The micro-chip device on display at the Science Museum was our first programmable quantum processor. Since then the technology has developed to include quantum sensing devices, quantum secured communications systems and more advanced quantum processors. World-wide, quantum technologies are progressing rapidly and many believe we are at the dawn of a quantum technology information revolution."

Now everyone can harness the power of quantum randomness and entanglement to take the strain from daily decision making! Researchers in QETLabs, at Bristol have created a Quantum Decision Maker application which uses super-pure quantum random numbers taken from their Quantum Photonic Chips to help you make difficult choices – people are asked to try it on their smartphone and let the team know what they randomly chose for lunch via Twitter @CQPBristol

Eric Johnston, Postdoctoral Research Associate in the Centre for Quantum Photonics, said: "In the next year, miniature chip-based quantum devices will be deployed across the Bristol Is Open metro-area testbed as part of the UK National Quantum Communications Hub.

"But importantly, even though quantum computers will have the power to challenge our internet security, a near-term solution is being developed which uses quantum random numbers to replace the pseudo-random numbers currently in use in everyday cryptographic schemes. These new ultra-high entropy absolute quantum random numbers will baffle supercomputers just enough to keep your secrets secret – for now!"

The mission of QETLabs is to take quantum science discoveries out of the labs and engineer them into technologies for the benefit of society.  It brings together £50 million worth of activity that covers theoretical quantum physics through experiment, engineering and skills and training toward concept demonstrators of quantum technologies.

Quantum in the Cloud

The chip which now resides in the science museum performed the earliest work using chip based quantum cryptography.  This device was also used in a number of quantum computing experiments including quantum chemistry and Shor's factoring of the number 21.  As more sophisticated devices were developed, this chip was retired and made available on-line to be used through the University of Bristol's Quantum in the Cloud (QITC) project; its sister chip has now replaced it and QITC continues to receive approximately 500 visitors a week to use the simulator and to access the chip -  www.bristol.ac.uk/physics/research/quantum/engagement/qcloud/

The development of the chip and subsequent success of the quantum in the cloud project is thanks in large part to our funders. In particular, we would like to acknowledge continued funding and support from EPSRC, ERC, the EC (PICQUE, BBOI, QUCHIP),The Royal Academy of Engineering and the US Army Research Office.