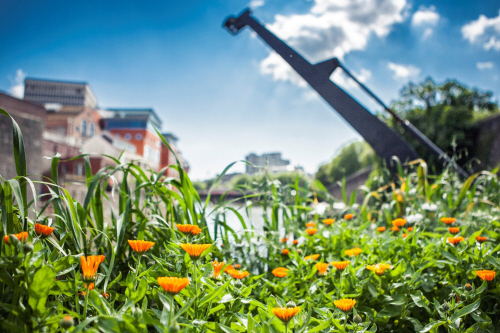 A Bristol art project about migration has won the 2016-2018 Vera List Centre Prize for Art and Politics. Presented every two years to an artist, or group of artists, whose work furthers social justice, this year the winner is Brazilian artist Maria Thereza Alves, who created Bristol’s Floating Ballast Seed Garden, in collaboration with the University of Bristol Botanic Garden, Bristol City Council and Arnolfini.

The garden, which was berthed in Bristol’s floating harbour between 2012 and 2016, formed part of Berlin based Alves’ Seeds of Change project and was brought to Bristol in 2011 at the invitation of Bristol City Council and Arnolfini.

The Seeds of Change project was developed in 2002 as a way to explore the social, political and cultural history over centuries of “ballast seeds”. These dormant seeds from ports and lands far from Bristol were carried in the ballast (earth, shell, stone and even trees) once used by trading ships to stabilize themselves in the harbour. Much of this ballast was dumped onto the riverbanks to control the ship’s balance leading to many of these non-native seeds to germinate and grow where they fell, creating exotic landscapes up and down the Avon riverbank.

For Alves, ballast seeds and flora function as metaphors for trade routes, and with it, the movement of humans around the globe.

Maria Thereza Alves, said: “Investigations resulting in site specific Seeds of Change installations in several ports throughout Europe proposed the creation of ballast gardens.  However, it was only in Bristol, with the support of the city council that I was able to realize the Floating Ballast Garden celebrating the micro histories of plants and humans together.”

Since its inception, a number of versions of the project have been situated in port cities around Europe including Marseille, Reposaari, Exeter, Dunkirk, Liverpool, and Bristol.

Councillor Estella Tincknell, Deputy Mayor and Cabinet Member for Culture, said: “We were honoured to have Maria agree to come to Bristol and to bring with her the idea of using a garden to represent the story of human migration. I would like to warmly congratulate her on receiving this reward, a just recognition of her vision and ability to connect the complex tales of human and plant migration in such a beautiful and evocative fashion. As a trading city that once stood at the forefront of international trade it is important to remember the part our city played in this story, for good and bad, and to reflect on the significant economic and social impact trade has had on Bristol.”

Nick Wray, Curator of the University's Botanic Garden, added: “One of the aims of the project was to re-establish the intimate connection between Bristol’s cosmopolitan floral history and the port city’s economic and social histories. The floating ballast seed garden has provided thought provoking planting, delivering a multi educational message and initiating discussing and debate.  I am thrilled Maria has been awarded this prestigious prize and that through the project the people of Bristol have had the opportunity to learn about the city’s plants, trade and maritime past.”

Helen Davies, Director of Audience Engagement at Arnolfini, said: ”We are so proud of Maria Thereza’s award and to have worked on this project for Bristol, which has grown from our Port City exhibition in 2007.  Maria always had ambitions to realise a permanent garden in the city, which, with partner support, has delivered a vibrant public engagement programme, including talks, performances and artist commissions. This engagement has extended citywide into 11 ballast gardens in schools and 5 community groups across Bristol to increase our understanding of different heritages and engagement with the city’s trading and maritime past, creating a living history of our city.“

On awarding her the prize, the Vera List Centre said the project “…weaves together the fields of art and politics in the most exemplary ways… The history of human migration has never been more relevant.”

David E. Van Zandt, the New School’s president, said in a statement.  “Through creative and scientific expression, Alves has made our past come to life through visual and oral art forms and, at the same time, highlights the importance of migration in the history of society.”

The prize initiative unfolds across various platforms and over an extended period of time. It serves as a catalyst for activities that illuminate the important role of the arts in society, and strengthen teaching and learning at The New School in art and design, social science, philosophy, and civic engagement. More than a single moment of recognition, it represents a long-term commitment to the question of how the arts advance social justice, how we speak of, evaluate and teach such work.

An exhibition of the winning project, a conference, integration into classes, and a publication featuring select nominated projects complement a cash award and short-term New York City residency for the honoree. In the spirit of the center's twenty-year history, the prize provides the opportunity for an ongoing public conversation on art and social justice as a global issue that engages audiences in New York City, nationally and around the world.

2016 – 2018 winner: Maria Thereza Alves
Brazilian artist Maria Thereza Alves has been named winner of The New School's 2016-2018 Vera List Center Prize for Art and Politics by an international jury of artists, curators and scholars including Ruth Wilson Gilmore, Charif Kiwan, Carin Kuoni, and Radhika Subramaniam, chaired by Carolyn Christov-Bakargiev. Alves is awarded the prize for her ongoing project Seeds of Change that explores the social, political and cultural history of ballast flora in port cities and, in so doing, reveals patterns, temporalities and instruments of colonialism, commerce and migration going back many centuries. Maria Thereza Alves was nominated by Lara Khaldi, an independent curator based in Jerusalem, Palestine.

The prize presentation as well as the accompanying conference, exhibition and publication will take place in New York in October 2017. The inaugural prize recipient (2012-2014) was Theaster Gates for Dorchester Projects; the 2014-2016 prize winner was Abounaddara, the anonymous collective of Syrian filmmakers.

The five Finalists for the 2016-2018 Vera List Center Prize for Art and Politics are the London-based interdisciplinary research agency Forensic Architecture; the artists coalition Gulf Labor; House of Natural Fibers (HONF), a new media arts laboratory in Yogyakarta, Indonesia; IsumaTV, a collaborative multimedia platform for indigenous filmmakers and media organization in Canada; and MadeYouLook, an artist collective based in Johannesburg, South Africa.

Seeds of Change: A Floating Ballast Seed Garden
Seeds of Change: A Floating Ballast Seed Garden is a floating garden located on Bristol’s historic Floating Harbour. The garden, which was launched in 2012, and occupies a 20m x 8m historic concrete grain barge. The garden was designed by artist Maria Thereza Alves and designer Gitta Gschwendtner working with University of Bristol Botanic Garden plant curator, Nick Wray. Bristol City Council, Arnolfini, and the University of Bristol Botanic Garden bring the garden to life each year. So far work on and around the garden has reached over 6000 people across the city. Over 500 school pupils, teachers, community group members and community workers have benefitted from the project, coming together – many for the first time - to learn about ballast seeds, plant life, Bristol’s history and to share stories and ideas about heritage and diversity. This unique project, that has inspired so many to pick up a spade for the first time, has given rise to 16 new garden spaces across the city.

About Maria Thereza Alves
Alves (born São Paulo, 1961) has worked and exhibited internationally since the 1980s, creating a body of work investigating the histories and circumstances of particular localities to give witness to silenced histories. Her projects are researched-based and develop out of her interactions with the physical and social environments of the places she lives, or visits for exhibitions and residencies. These projects begin in response to local needs and proceed through a process of dialogue that is often facilitated between material and environmental realities and social circumstances. While aware of Western binaries between nature and culture, art and politics, or art and daily life, she deliberately refuses to acknowledge them in her practice. She chooses instead to create spaces of agency and visibility for oppressed cultures through relational practices of collaboration that require constant movement across all of these boundaries.

Commissioner and Funding
Seeds of Change: A Floating Ballast Seed Garden was commissioned by Bristol City Council’s City Design Group as part of its public art programme. The project was developed in partnership with Arnolfini, and University of Bristol Botanic Garden and funded by the Ashley, Easton & Lawrence Hill Neighbourhood Partnership, with the kind support of Bristol Harbour Authority, Arnolfini, Ramboll, University of Bristol Botanic Garden and Avon and Somerset Probation Trust Community Payback team.