Seeing colour in a contemporary light 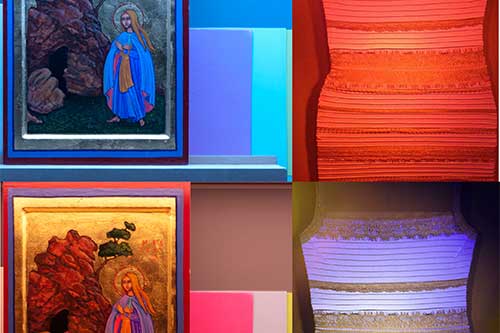 Colours are not physical things but the result of a process that starts in the eye and continues in the brain. The limits of colour constancy, when the colours of objects appears the same under different lights - from daylight to LED light, will be explored by a leading visual neuroscientist at a free University of Bristol public lecture next week [Thursday 29 October].

The lecture, entitled Seeing colour in a contemporary light: from daylight to LED light, via old masters and a dress, will take place on Thursday 29 October at 6 pm in Lecture Room 1, School of Chemistry, Cantock’s Close, Bristol.  The event is organised by the Bristol Vision Institute (BVI).

Professor Hurlbert’s research is in understanding the human brain, through understanding the human visual system. She focusses on colour vision and its role in everyday visual and cognitive tasks in normal development and ageing as well as in developmental disorders such as autism. She has particular research interests in applied areas such as digital imaging and novel lighting technologies.  Her talk will illustrate the limits of colour constancy by describing experiments using tuneable multi-channel LED light sources, carried out both in the lab and in public installations.

One public installation she held last year as part of the National Gallery’s 2014 Making Colour exhibition included a mass psychophysics experiment.  Data from the installation confirmed previous laboratory findings of better colour constancy for certain natural illumination changes as well as revealing new findings on colour name-changes under artificial illumination changes.  These and other experiments highlight the fact that the colours we see, and the constancy with which we see them, must evolve along with new technology that enables new and ever-changing illuminations.

Professor Hurlbert said: “Colour is inherently subjective and individual. This variability of colour was brought home to millions of people with the #thedress, the internet phenomenon earlier this year, which caused people to argue over whether a simple dress in a single photograph was white-and-gold or blue-and-black.

“In fact, the variability of reported colours elicited by #thedress demonstrates the power of colour constancy, a fundamental phenomenon of normal colour vision, which operates to stabilise object colours across the wide changes in illumination spectrum to which we are daily exposed.”

Professor David Bull, Director of BVI and Professor of Signal Processing in the Department of Electrical and Electronic Engineering, added: “We have two basic requirements for the Richard Gregory Lecture – firstly that it’s about exciting contemporary issues in Vision Science and secondly that it covers something that Richard would have enjoyed. Anya is the latest in a long line of distinguished Richard Gregory lecturers.  Her lecture will address issues that have provoked much discussion recently, with the public debate over ‘that dress’, so I have no doubt that she will deliver on both counts.”

Professor Hurlbert will join an exciting list of speakers to have delivered this prestigious lecture in previous years, including Dr Andrew Watson, a pioneer in vision science at NASA Ames Research Center; Vilayanur Ramachandran, from the University of California – one of the world’s leading visual neuroscientists; David Sproxton, co-founder and Executive Chairman of Aardman Animations and the BBC Controller of Research and Development, Matthew Postgate.

Admission is free but advance booking is essential through the University’s online shop.  For further information about the lecture contact Jen Hawkins at j.hawkins@bristol.ac.uk or tel 0117 331 5759.

The 2015 Richard Gregory Memorial Lecture entitled Seeing colour in a contemporary light: from daylight to LED light, via old masters and a dress by Anya Hurlbert, Professor of Visual Neuroscience and Director of the Centre for Translational Systems Neuroscience at Newcastle University, will take place on Thursday 29 October at 6 pm at the University of Bristol, Lecture Room 1, School of Chemistry, Cantock’s Close, Bristol BS8 1TS.

About Bristol Vision Institute (BVI)
The University of Bristol is a world leader in vision science. Bristol has a long and rich tradition at the forefront of the study of human and animal vision, artificial vision systems and imaging more generally.

The University has identified vision science as one of its core “research themes” and underlined this with the creation, in 2007, of the Bristol Vision Institute (BVI). BVI currently functions as a virtual research institute and has been highly successful in stimulating research interaction and collaboration.  It is built on the belief that interdisciplinary research is central to the future development of the field. BVI brings together engineers and scientists from a range of academic disciplines (from 14 departments) including electrical and electronic engineering, computer science, biological sciences, experimental psychology, mathematics, biochemistry, anatomy, together with local partners such as the Bristol Eye Hospital, the Bristol Robotics Laboratory and UWE’s Machine Vision Group. It has a high international profile with collaborations across the world.

BVI currently represents a grouping of around 36 permanent academic staff and some 70 researchers at Bristol working on vision and imaging research and its engineering applications.