Mending the smallest of broken hearts 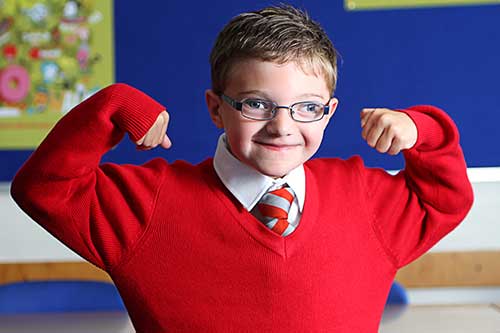 Calum who was born with truncus arteriosus BHF

Researchers at the University of Bristol have been awarded over £170,000 by the British Heart Foundation (BHF) to produce a graft which may reduce the number of surgeries required to treat children born with certain types of congenital heart disease.

Congenital heart disease is the most common type of birth defect. In the UK alone over 4,000 babies are diagnosed with congenital heart disease each year. The funding has been announced as part of the BHF's new research strategy, which pledges to spend half a billion pounds on cardiovascular research within the next five years.

The only treatment for these conditions is corrective surgery where a piece of tissue, known as a graft, is used to replace the damaged area. However, often surgery has to be repeated several times throughout childhood as the child’s heart outgrows the graft used to repair it.

Now, researchers at the University’s Bristol CardioVascular in the School of Clinical Sciences are working on grafts that are able to grow like living tissue and can therefore grow along with a child’s heart. These new grafts would mean that instead of having multiple operations to insert bigger grafts as the patient’s heart grows only one operation would be needed.

Paolo Madeddu, Professor of Experimental Cardiovascular Medicine and lead researcher, said: “In an ideal world we would be able to treat congenital heart disease with only one operation. However, the grafts currently used to repair complex problems within the structure of the heart do not grow as a child’s heart grows and therefore need to be replaced over time.

“By developing these new grafts which are able to match the growth of a child’s heart, we hope to reduce the amount of surgeries that a child born with congenital heart disease must go through”

Nicola Morris, 46 from Bradly Stoke near Bristol, is the mother of nine-year-old Calum. He was born with truncus arteriosus, a rare condition which means that the two main arteries which supply blood to the lungs and the body do not arise normally from the heart. Calum had open heart surgery when he was just 10 days old. He had two further operations when he was four and six years old, and he is scheduled to have a further open heart surgery next year.

“It’s incredibly traumatic for Calum every time he has surgery. After an operation two years ago he was in intensive care for 24 hours and had to have intravenous antibiotics for three months afterwards. He’s missed an awful lot of school over the years.

“But as well as the physical there’s the psychological impact. Calum has had nightmares a result of what he’s been through.

“If these grafts could reduce the number of operations for children like Calum it would have a hugely positive impact on their lives.”

A video about how research got Calum to his school sports day is available on YouTube.

Professor Peter Weissberg, Medical Director of the British Heart Foundation, said: “This research, being conducted at the University of Bristol, is a brilliant example of the BHF’s commitment to ensure more research makes it out of the lab so it can benefit people suffering from cardiovascular disease.

“Hopefully, in the near future we will see the grafts being pioneered by Professor Madeddu and his team being used to treat children with congenital heart defects, ultimately reducing the amount of time they will need to spend in hospital throughout their lifetime.”

“The BHF exists to end the suffering caused by all forms of heart and circulatory disease and we’re committed to funding the very best researchers doing the highest quality research in order to achieve that goal.”

About the British Heart Foundation (BHF)
For over 50 years we’ve pioneered research that’s transformed the lives of people living with heart and circulatory conditions. Our work has been central to the discoveries of vital treatments that are changing the fight against heart disease. But so many people still need our help. From babies born with life-threatening heart problems to the many Mums, Dads and Grandparents who survive a heart attack and endure the daily battles of heart failure. Every pound raised, minute of your time and donation to our shops will help make a difference to people’s lives. For more information, visit bhf.org.uk