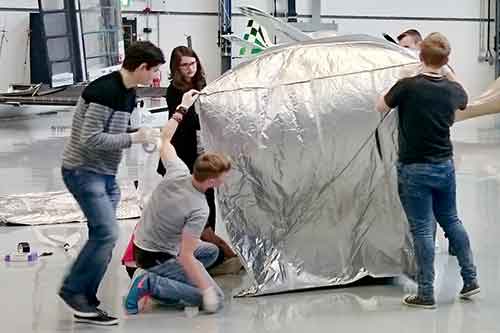 Engineering Design students from the University of Bristol have teamed up with Icon Films, a Bristol-based independent TV production company, to design and construct the UK’s first lead balloon for BBC One’s The One Show.

Following their successful challenge in 2014 building a functional chocolate teapot, Icon Films and Marty Jopson enlisted the expertise of the Engineering Design students to dispel the idiom and prove it is possible to fly a lead balloon.

Lead is one of the highest density elements suitable as a construction material.  To reduce the weight of the balloon the team sourced specialist lead foil measuring 16 thousandths of a millimetre thick (0.016mm) but still six times heavier than regular foil.

The first construction, a four metre lead zeppelin design with an internal wooden frame, failed as it was adding too much weight to the structure. Six weeks later the team returned to the National Composites Centre (NCC), a world-leading research and technology hub hosted by the University of Bristol, with a new approach; to construct an origami inspired balloon measuring 1.6 metres cubed, by layering sheets of the lead foil on top of each other precisely in the right order.

The balloon was initially filled with air to start the unfolding process. Air was then replaced by helium to complete the inflation as the balloon twisted out 90 degrees into the cube shape. As it did the moment of truth arrived and the seemingly improbable turned into reality - the balloon ascended reaching its tethered height of five metres.

Owen Gay, Executive Producer at Icon Films, said: “The One Show is always challenging us to pull off the seemingly impossible.  We proved that you can pour tea from a chocolate tea pot but this was a far great challenge.  However, thanks to physics, a little bit of origami and a lot of hard work from University of Bristol’s Engineering Design students, we can now all celebrate the success by saying it’s gone up like a lead balloon.”

Tom Bewley, from Bristol’s Engineering Design team, added: “Once in a while a revolutionary balloon comes along that changes everything and we firmly believe our design will supersede old-fashioned and uninspiring latex for a generation of children’s parties.  For our next project, we intend to produce a viable balloon from granite blocks.”

Total idiom – going down like a lead balloon will be broadcast on BBC One’s The One Show on Friday 15 May at 7 pm and will be available on BBC iPlayer for 25 days after transmission.

25 years old this year, Icon Films has produced over 300 hours of factual programming for the UK and international markets. Icon Films brings together funders and works with broadcasters including the BBC, Channel 4, Five, ITV, National Geographic, Discovery Networks, Arte and PBS.  Its work is internationally distributed by ITV Studios Global Entertainment, BBC Worldwide, Zodiak Rights, FremantleMedia International and TCB Media Rights. Icon Films has a reputation for originality, excellence and entertainment across the breadth of factual genres including science, history, exploration and natural history.

Icon Films’ series for Animal Planet US, River Monsters, presented by angling explorer Jeremy Wade, is the best performing series in the network’s history and is now in its seventh series.