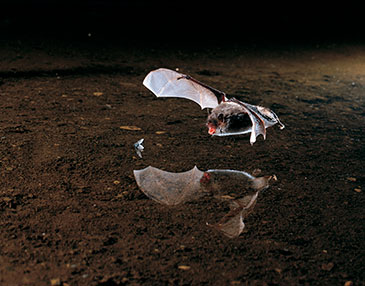 A Daubenton’s bat (Myotis daubentonii) foraging low over water for insects by kind permission of the author, © Dietmar Nill

Foraging bats obey their own set of ‘traffic rules’, chasing, turning and avoiding collisions at high speed, new research from the University of Bristol has found.

Dr Marc Holderied of Bristol’s School of Biological Sciences studied pairs of Daubenton’s bats (Myotis daubentonii) foraging low over water for stranded insects at a site near the village of Barrow Gurney in Somerset.

He said: “Collective movements of flocking birds or shoaling fish are amongst the most fascinating natural phenomena, and everyone has experienced the challenges of walking through a moving crowd.  What information individuals use for movement coordination is, however, very difficult to know – except in the case of echolocating bats.”

These flying mammals perceive their surroundings by emitting loud and high-pitched biosonar calls and listening for the returning echoes. Because bat biosonar imaging is much sparser in information than vision, Dr Holderied was able to accurately measure the biosonar calls of the interacting bats and then calculate what each of the individuals perceived.

The results indicated that bats obey their own intriguing set of ‘traffic rules’: they chase each other, perform tandem turns and even slow down to avoid collision.

The co-authors of the work, Dr Luca Giuggioli, a movement ecology expert, and Thomas McKetterick, a PhD student at the Bristol Centre for Complexity Sciences, were able to model the bats’ biosonar view of their surroundings during these interactions and discovered that one simple trick suffices to create all the bats’ interactive behaviours.

They swap leader-follower roles and perform chases or coordinated manoeuvres by copying the heading a nearby individual was using up to 500 milliseconds earlier.  (500ms is almost as fast as the blink of a human eye which has been measured at 300-400ms).

Video taken at the study site in Barrow Gurney showing four interacting bats: two in the front chasing each other, two in the background flying in parallel at a distance

Dr Holderied said: “The bats seem to have adopted a simple trick:  once another individual is close enough for your biosonar to pick up its echo, copy this individual’s flight direction within four to five of your own wingbeats.”

Dr Luca Giuggioli said: “Quantifying the movement decisions that bats adopt to forage has implications well beyond animal ecology. By employing movement strategies that nature has optimized over millions of years, engineers may be able to improve the efficiency of search and rescue missions, monitoring tasks, and surveillance operations in the emerging market of flying drones and autonomous moving vehicles.”

The study is published today in PLOS Computation Biology.