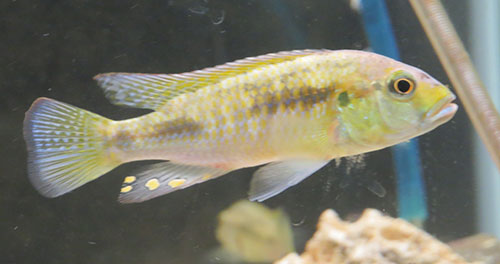 The researchers discovered two significantly different forms of a common species of cichlid fish: one, known as littoral, has yellow-green males and lives towards the shores of the lake... courtesy of Bangor University 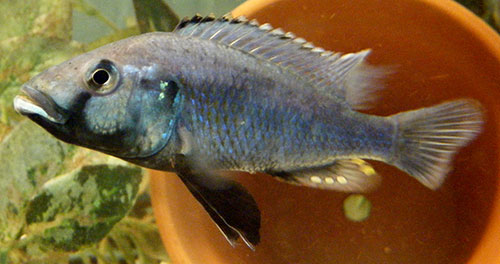 ...the other, known as benthic, has dark blue-black males and lives towards the bottom of the lake where the light levels are much lower courtesy of Bangor University

Cichlid fish from a tiny volcanic crater lake in Africa have been caught in the act of sympatric speciation, whereby a new species evolves when there is no geographic barrier to physically separate the new species from the old. The study, led by the Wellcome Trust Sanger Institute and co-authored by the University of Bristol, is published today in Science.

Scientists studied the whole-genome sequences of 146 small fish in the 700m-wide Lake Massoko in Tanzania in order to answer two of the most debated questions in evolutionary biology: is sympatric speciation possible and, if so, what are the genetic and physical traits that drive this form of evolution (sexual attraction or specialisation in lifestyle, diet or other ecological factors)?

Senior author, Professor George Turner of the School of Biological Sciences, Bangor University said: “The idea of sympatric speciation has divided evolutionary opinion for a long time.  It has been difficult to substantiate that new species can arise when genetic variations can be exchanged easily between the two evolving groups.  But we have caught this form of evolution in the act by identifying two different forms of cichlid fish that are separating from each other within a lake that is only 700m wide.”

Cichlid fish are a valuable model of evolution.  In nearby Lake Malawi, many hundreds of cichlid species have been found, differentiated by size, shape, colour, feeding habits and ecological preferences such as living towards the surface of the lake or at the bottom.  Because of this vast diversity the lake is known as ‘Darwin’s Pond’.  In contrast Lake Massoko is ‘Darwin’s puddle’: a much simpler place with many fewer species and fewer factors to drive speciation.

In the lake, researchers discovered two significantly different forms (ecomorphs) of a common species of cichlid fish.  One ecomorph – known as littoral – has yellow-green males and lives towards the shores of the lake.  The other form – benthic – has dark blue-black males and lives towards the bottom of the lake where the light levels are much lower.  There are many other measurable differences between the ecomorphs, for example in body shape, jaws and diet.

These differences are reflected in the genetic differences observed when whole genomes from the two ecomorphs were sequenced and compared.  The majority of significant genetic variation lay in a small number of genomic regions associated with sight (such as rhodopsin and other twilight-associated genes), hormone signalling, size and shape.

First author Dr Milan Malinsky of the Wellcome Trust Sanger Institute and the Gurdon Institute, University of Cambridge said: “One of the most striking characteristics of this diversification is that less than 1 per cent of the genome appears to be involved.  Previous expectations were that speciation involved changes across the whole genome.  However, in this example of nascent sympatric speciation, we find that the differences are confined to localised regions of the genome – known as genomic islands – that are associated with specific traits.”

Confusingly, no single factor – either genetic or physical – seems to separate the two morphs: although they prefer different depths, the yellow and blue fish are frequently found together.  One theoretical model for sympatric speciation is that sexual selection can reinforce differences via mate preference.  The investigators also carried out mate-choice experiments between the ecomorphs in a controlled laboratory setting and found some differences, but again not enough to explain the separation by themselves.

Senior author, Dr Martin Genner of Bristol’s School of Biological Sciences said: “We seem to be seeing a complex combination of ecological separation and mate-choice preference that jointly has allowed the two ecomorphs to separate even in the presence of some genetic exchange.  These fish have much to tell us.”

An exciting prospect is that these findings in a simple system will be relevant to understanding the much richer and more dramatic evolutionary radiation in Lake Malawi and the other African great lakes, and indeed beyond.

Senior author, Dr Richard Durbin from the Sanger Institute said: “The same genes are found in many species, both in fish and in other vertebrates. So the mechanisms at work in Lake Massoko are likely to have been involved in speciation more widely over history, driving evolution in which species can separate genetically to exploit new ecological niches even when there is no physical separation.”