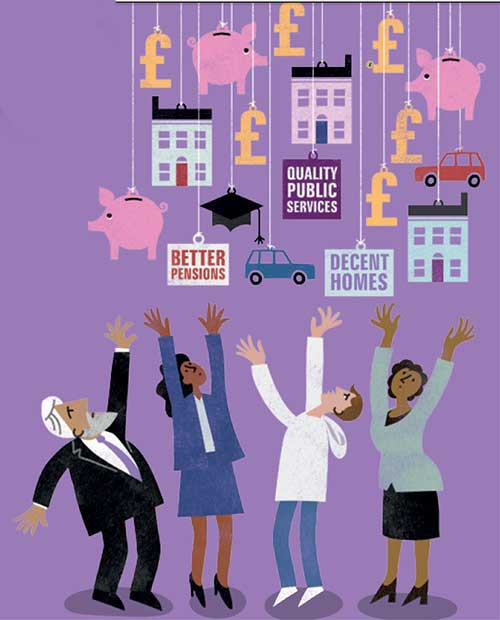 Young people’s falling long-term economic prospects are not down to older people in society hoarding all the wealth, and will not be improved by cutting pensioner benefits to fund more public spending on young people, according to a new TUC report which draws on analysis by researchers from the University of Bristol.

The dismal outlook for many young people is often contrasted with apparently high levels of wealth amongst older people.  However, the report finds that pensioners do not comprise the majority of the UK’s wealthiest households: while six per cent of those aged 75-84 are in the wealthiest decile, six per cent of this age group are also in the very poorest decile.

Workers in their 40s and 50s who are high earners and home-owners are most likely to be wealthy.  Two-thirds of those in the wealthiest decile are aged between 45 and 65 – although, again, others in this age group are very badly off.

The report does recognise that there have been some intergenerational shifts.  Some recent retirees have experienced exceptional above-inflation increases in property wealth, while young people without access to large deposits are less able than the generation before them to buy their own homes and, given the decline in social housing, are more likely to live in insecure private rented accommodation.

However, the analysis refutes the claim that these new wealth inequalities are driven solely by age, and shows that they are also a result of wider changes in terms of how well some jobs pay and how much some wealth households have.

Young against old? uncovers significant wealth variations by region and nation.  The wealthiest households are far more likely to live in London and the South East than Wales, the North East and other regions.

It also uncovers how hard life is for many lower income households across the UK, with half of low earners never having money left over to save at the end of the month and 20 per cent of low and middle earners reporting that they run out of money most of the time.  While high earners have median savings of £12,200, low earners only have an average of £300 in the bank (and many have significant debts).

Young people’s earnings were hit particularly hard during the recession.  For some young workers, wider changes in the labour market mean that their jobs are now far less secure than those their parents had.

The report demonstrates that simply taking benefits from pensioners to give to young people would be a short-sighted and inappropriate approach to addressing the difficulties young people face.

For example, means testing public spending on pensioners’ winter fuel allowance (which in 2012 constituted £2.16bn of the £190.9bn spending on those over 65) would have very little impact on intergenerational inequality or the future prospects of young workers, leaving the large challenges that many of today’s young people face unaddressed.

Young against old? What’s really causing wealth inequality? was written for the TUC by the Director of the Strategic Society Centre, James Lloyd, drawing on analysis of the UK Wealth and Assets Survey by Andrea Finney and David Hayes at the University of Bristol's Personal Finance Research Centre.

The two Wealth and Assets reports ('Hard Times' and 'What Makes the Wealthy Wealthy?') by the University of Bristol are avaiable here.