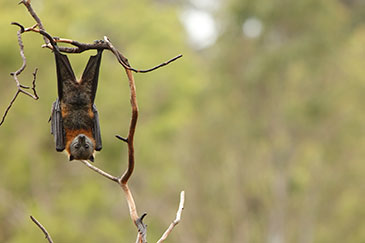 Why are viruses such as Ebola so dangerous to humans yet do not appear to harm the bats which transmit them? A team of scientists from the University of Bristol, UK and CSIRO’s Australian Animal Health Laboratories (AAHL) have used cutting edge techniques to comprehensively compare the response of bat and human cells to a highly dangerous bat virus.

This is the first time scientists have been able to study how cells from these two species respond to the same virus on a side-by-side basis.

The research, published today in Genome Biology, focuses on the bat-borne Hendra virus which, like Ebola, is not dangerous to bats but very dangerous to humans and some other animals.

The Hendra virus has only been found in Australia, with seven cases and four deaths in humans since it was discovered 20 years ago, however there have been outbreaks of related henipaviruses in Malaysia and the Philippines.  Large numbers of horses have become severely ill from Hendra virus, resulting in infected animals being euthanised to stop disease transmission to people.

In this study, the team at AAHL infected human cells in their specialist high containment laboratories with Hendra virus and studied on a very large scale how the virus affects genes and proteins in the infected cells.  At the same time they also infected bat cells with the same virus and studied how the bat cells responded.

Dr David Matthews of Bristol’s School of Cellular and Molecular Medicine, joint senior author of the research, said: “The bat genome has only recently been sequenced and as such we do not have a good list of what genes and proteins are made by bats, how similar they are to humans and other mammals and indeed if bats have many proteins that are very different to our own.  Plus we have only limited information on how bat genes and proteins respond to infections with viruses.”

With the assistance of Bristol’s High Performance Computing team, the researchers used the University's supercomputer, Blue Crystal, to identify about six thousand genes and proteins made by the bats and examine how these genes and proteins changed in response to infection by the Hendra virus.  A similar analysis was also done on the human cells.

The team made extensive use of Bristol University’s Proteomics Facility which has the required state-of-the-art mass spectrometers needed to enable them to track thousands of proteins at the same time in the two species.

This combined computer and laboratory-based analysis of the data found that human and bat cells respond very differently to the same virus.  The bat cells seemed to respond robustly and quickly to the infection triggering a lot of biochemical pathways that are known to be potentially helpful in other virus infections.

By contrast, the human cells seemed to take much longer to respond to the virus indicating, at least in this experiment, that human cells take longer to realise there is an infection and trigger the biochemical pathways that might protect someone from the infection becoming fatal.

Dr Michelle Baker, who headed the team at AAHL with her leading researcher Dr James Wynne, said: “As with all fundamental scientific work there is a long way to go but we have shown how to compare two different animals (bats and humans) side by side and look at how thousands of genes and proteins respond to the same bat virus.

“By doing this we are at the beginning of understanding why these viruses are so dangerous to us and so benign to bats.  Indeed the kind of bat cells we used in this experiment are from a similar type of fruit bat as those  which harbour Ebola virus in Africa.”