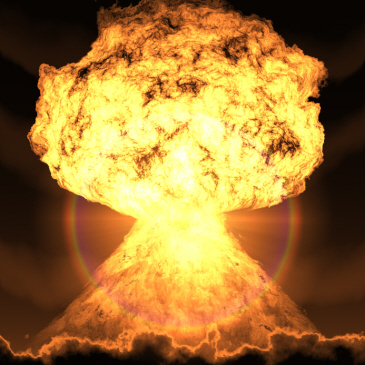 There have been at least 13 potentially catastrophic cases of near-use of nuclear weapons worldwide since 1962, according to a new report which warns that the risk of nuclear weapons being detonated is higher than previously thought.

A report by Chatham House, home of the Royal Institute of International Affairs, found that the risks associated with nuclear weapons were not only a Cold War phenomena, but still exist today.

Dr Benoit Pelopidas, from the Global Insecurities Centre at the University of Bristol, co-authored the report which was presented at the Nuclear Non-Proliferation Treaty (NPT) Preparatory Committee at the United Nations headquarters in New York.

Although nuclear weapons have not been detonated in violent conflict since 1945, the report found that there have been ‘disturbing near misses in which nuclear weapons were nearly used inadvertently’ owing to miscalculation, error or sloppy practices.

In several cases the large-scale launch of nuclear weapons was nearly triggered by technical malfunctions or breakdowns in communication causing false alarms, in the US, Russia but also in most other nuclear armed-states. Disaster was averted only by cool-headed individuals gambling that the alert was caused by a glitch and not an actual attack or not willing to take the responsibility to use those weapons.

Historical cases of near nuclear use resulting from misunderstanding demonstrate the importance of human judgment in nuclear decision-making. Most importantly, it shows that in some cases, people had to go against established procedures in order not to use those weapons.

Recent incidents, such as the 2009 collision of French and UK submarines, along with cases of misconduct in the US Air Force revealed in 2013, suggest cause for concern regarding the current limits of safety and security measures and in command and control.

The report precisely shows the limits of learning from previous episodes and the persistence of sloppy practices in nuclear weapons management, which have occurred at all levels of decision-making: leaders, nuclear safety and security teams and top-level military personnel.

Dr Pelopidas, a lecturer in International Relations in the School of Sociology, Politics and International Studies and a member of the Global Insecurities Center, said: “Understanding those episodes and the lessons learned from them – good or bad – is of vital importance given the consequences of the use of nuclear weapons, let alone a nuclear conflict and the risks following from overconfidence in nuclear safety and security.

“One needs to keep in mind that this report only focuses on a sample of all potentially catastrophic episodes involving nuclear weapons or fissile material being unaccounted for. Many other technical accidents have happened and have been documented in previous studies.

“Given that it took us several decades to learn about those cases and that most nuclear weapon states have not reported cases of mismanagement of their own weapons, it is most likely that we can only see an incomplete picture. We still know very little about nuclear history in spite of the confidence of security experts. For all those reasons, episodes similar to those that have happened in the past are likely to happen in the future.

“The decades since 1945 have been punctuated by a series of disturbing close calls. Evidence from many declassified documents, testimonies and interviews suggests that the world has, indeed, been lucky, given the number of instances in which nuclear weapons were nearly used inadvertently as a result of miscalculation or error.”

‘Too Close for Comfort: Cases of Near Nuclear Use and Options for Policy’, by Patricia Lewis, Heather Williams, Benoît Pelopidas and Sasan Aghlani, April 2014, Chatham House.