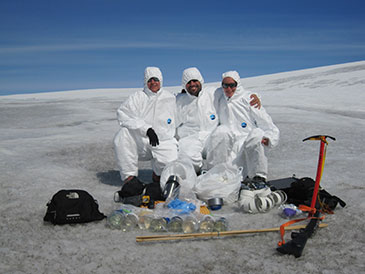 The first ecological study of an entire glacier has found that microbes drastically reduce surface reflectivity and have a non-negligible impact on the amount of sunlight that is reflected into space.

The study, by researchers at the University of Leeds and the University of Bristol, will help improve climate change models that have previously neglected the role of microbes in darkening the Earth’s surface.

Observing how life thrives at extreme cold temperatures also has important implications for the search for life on distant worlds, such as Jupiter's icy moon, Europa.

Stefanie Lutz, a PhD student at the University of Leeds, and lead author of the study, said: "Our three-week field trip revealed a microbial garden of life forms flourishing in this cold environment, including snow algae, bacteria, fungi and even invertebrates.

"Skiers may have seen snow algae before, but not been able to identify them.  They are visible to the naked eye as coloured snow – most often red – and are frequently referred to as 'watermelon snow'."

The study was carried out on the Mittivakkat Glacier in south east Greenland during the summer of 2012, which was the hottest summer and thus the fastest melting season recorded for 150 years.

"Our timing was serendipitous, as it meant we were able to see changes in microbial processes over an extremely fast melting season and observe a process from start to end across all habitats on a glacier surface.  This is the most comprehensive study of microbial communities living on a glacier to date," said Stefanie Lutz.

The research showed that, compared to pure snow and ice, the reflectivity of the glacier (also known as the 'albedo') can be reduced by up to 80 per cent in places where coloured microbial populations are extremely dense, leading to the darkening of the glacier surface.

Professor Benning said: "Previously, it was assumed that low albedo, which is most often measured from satellites, was primarily due to soot or dust.  However, our research provides a first, ground-based measure for the microbial contribution to albedo.  We have shown that albedo is strongly affected by and dependent upon the development and dominance of microbial communities.

"In future climate scenarios, where even more melting is predicted, it is crucial that we are able to better discriminate between all factors affecting albedo."

The research is published today in the journal FEMS Microbiology Ecology