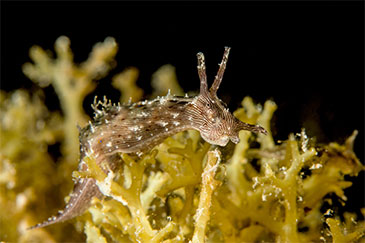 The development and survival of an important group of marine invertebrates known as sea hares is under threat from increasing boat noise in the world's oceans, according to a new study by researchers from the UK and France.

While previous studies have shown that marine noise can affect animal movement and communication, with unknown ecological consequences, scientists from the Universities of Bristol and Exeter and the École Pratique des Hautes Études (EPHE) CRIOBE in France have demonstrated that boat noise stops embryonic development and increases larval mortality in sea hares.

Sea hares (specifically the sea slug Stylocheilus striatus used in this study) usually hatch from their eggs to swim away and later feed on toxic alga but this study, conducted in a coral reef lagoon in French Polynesia, found that when exposed to playback of boat noise, more eggs failed to develop and those that hatched were more likely to die.

Lead author Sophie Nedelec, a PhD researcher at the University of Bristol and EPHE said: “Traffic noise is now one of the most widespread global pollutants. If the reproductive output of vulnerable species is reduced, we could be changing communities and losing vital ecological functions. This species is particularly important because it eats a toxic alga that affects recruitment of fish to coral reefs.”

Anthropogenic (man-made) noise is now recognised as a global pollutant, appearing in national and international legislation (for example, the US National Environment Policy Act and European Commission Marine Strategy Framework Directive). Boats are found around all coastal environments where people live and the noise they make spreads far and wide. Increasingly, recent research has indicated that noise from human activities can affect the behaviour and physiology of animals, but this is the first study to show impacts on development and larval survival.

Co-author, Dr Steve Simpson, a marine biologist and senior lecturer at the University of Exeter, said: “Boat noise may cause stress or physically disrupt cells during development, affecting chances of survival. Since one in five people in the world rely on marine animals as a major source of protein, regulating traffic noise in important fisheries areas could help marine communities and the people that depend on them.”

Co-author, Dr Suzanne Mills, an evolutionary biologist from CRIOBE, Perpignan said: “Our study used controlled field experiments and a split-brood, counterbalanced design to account for any possible site or genetic effects. Nearly 30,000 eggs were placed in plastic tubes. Half the eggs from each mother were near speakers playing boat noise while the other half were near speakers playing coral-reef ambient noise. Both success of embryonic development and post-hatching survival decreased by more than 20% as a consequence of exposure to boat-noise playback.”

Co-author, Dr Andy Radford, a reader in behavioural ecology at the University of Bristol, said: "This is the first indication that noise pollution can affect development and survival during critical early life stages. Growing evidence for the impact of noise on animals suggests that consideration should be given to the regulation of human activities in protected areas."

The research is published today in Scientific Reports.