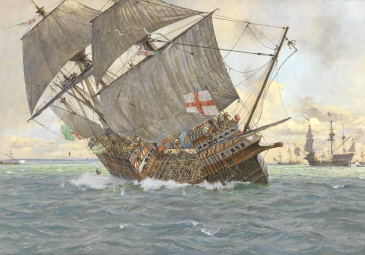 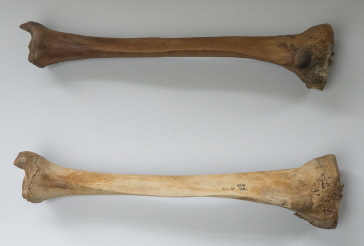 Displayed are two bone specimens taken from sailors on board the Mary Rose, which sank in 1545. One bone (darker) has rickets and the other (lighter) does not. Some bones that appeared abnormal in shape were found to have rickets. The dark discolouration on the rickets infected bone is due to the effects of the conditions underwater.

The bones of sailors who sailed on Henry VIII’s Mary Rose ship have been analysed with the help of new laser technology to identify evidence of bone disease.

The famous vessel sank in battle on the 19 July 1545, resulting in over 400 men losing their lives. The environment of the Solent meant that the ship and the sailors were preserved in silt, which helped to keep them in remarkably good condition.

Two sets of tibia bones - bones that appeared anatomically healthy and bones that were abnormal in shape - were obtained from The Mary Rose Trust, and compared to a ‘normal’ bone from someone who had recently died, which was supplied by the Vesalius Clinical Training Centre at the University of Bristol.

The deformations in the abnormal bones were suspected to be due to a metabolic bone disease such as rickets (the poor diet of the average person in the 1500s would have increased the prevalence of rickets). The results of the Raman study confirmed that the abnormally shaped bones did in fact have chemical abnormalities.

The bones were analysed at the Royal National Orthopaedic Hospital (RNOH) in Stanmore, North London, as part of a study by University College London (UCL), the Science and Technology Facilities Council (STFC) and The Mary Rose Trust.

The RAMAN study, funded as part of a £1.7 million grant from the Engineering and Physical Sciences Research Council, was led by Professor Allen Goodship at UCL.

Professor Goodship, who is also Director and Head of the Centre for Comparative and Clinical Anatomy at the University of Bristol, said: “There was an amazing similarity in the chemical composition of the normal bones from the Vesalius Centre donors and those that had been on the sea bed for over 400 years.  The use of the Raman technique allow us to analyse these unique specimens without causing any damage.”

The Raman technique shows potential as a tool for understanding the presence and prevalence of metabolic bone disease in historical populations and may have a place in modern-day detection of the condition, with reports earlier this year warning that Britain is seeing a return of Tudor-era diseases.

Dr Jemma Kerns, RAMAN Clinical Study Manager at UCL and RNOH, one of the scientists who conducted the study, commented: “This is the first time that this laser technology has been used to study bone disease in archaeological human bone. We have identified chemical changes in the bones, without damaging them. There is strong evidence to suggest that many of the sailors had suffered from childhood rickets and we hope to apply the Raman technique to the study of modern day rickets.”

Alex Hildred, Curator of Human Remains at the Mary Rose Trust, added: “The Mary Rose Trust has the responsibility for the remains of over 179 individuals who perished with the ship. Their provenance is absolute; they represent the crew of an English warship in July 1545. The human remains have potential to make a contribution to the public through research, education, display and interpretation. Their use to confirm the presence and prevalence of metabolic bone disease in the 16th century is one of these contributions.”

The Vesalius Clinical Training Centre at the University of Bristol, is a centre and philosophy for exciting and stimulating learning that shares and develops knowledge and skills related to clinically relevant anatomy in the advancement of clinical practice. Its dedicated and professional team is committed to the highest standards in the development of this world-class facility and life-long learning partnerships for ongoing professional development.  The centre relies heavily on the generosity of members of the public who bequeath their bodies to the centre in order to offer this essential training.

The Royal National Orthopaedic Hospital is the largest specialist orthopaedic hospital in the UK, and a recognised world leader in the field of orthopaedics. It treats more than 100,000 neuro-musculoskeletal patients a year for conditions ranging from acute spinal injuries to chronic back pain. The century-old RNOH is planning a major development of its site in Stanmore, Middlesex, and has launched a £15 million appeal to fund vital additional facilities and equipment for the new hospital.

UCL, founded in 1826, was the first English university established after Oxford and Cambridge, the first to admit students regardless of race, class, religion or gender, and the first to provide systematic teaching of law, architecture and medicine. We are among the world's top universities, as reflected by performance in a range of international rankings and tables. UCL currently has almost 29,000 students from 150 countries and in the region of 10,000 employees. Our annual income is more than £900 million.

The Science and Technology Facilities Council (STFC) is keeping the UK at the forefront of international science and tackling some of the most significant challenges facing society such as meeting our future energy needs, monitoring and understanding climate change, and global security. The Council has a broad science portfolio and works with the academic and industrial communities to share its expertise in materials science, space and ground-based astronomy technologies, laser science, microelectronics, wafer scale manufacturing, particle and nuclear physics, alternative energy production, radio communications and radar.

The Mary Rose Museum - The Mary Rose was Henry VIII’s favourite warship which sunk during the Battle of the Solent in 1545. Through a mammoth effort, it was recovered from the Solent sea-bed in 1982. The hull has been undergoing an intense programme of conservation since, and the volume and scale of the treasures found in the Mary Rose lead David Starkey to call it ‘Britain’s Pompeii’- a truly significant national discovery which has provided an invaluable insight into the Tudor period. May 2013, the Mary Rose Museum was opened, housing the hull and many thousands of its Tudor artefacts. So far the museum has seen over 700,000 visitors and has won many national awards. It was also a Finalist for this year’s Art Fund Museum of the Year award. The Mary Rose Museum is located within Portsmouth Historic Dockyard, Portsmouth, UK.

The Engineering and Physical Sciences Research Council (EPSRC) is the UK's main agency for funding research in engineering and the physical sciences. EPSRC invests around £800 million a year in research and postgraduate training, to help the nation handle the next generation of technological change.