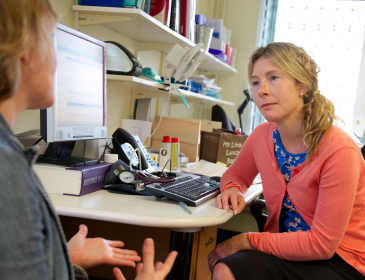 GPs should consider a more overt discussion with patients when referring them for further investigation of symptoms which may indicate cancer, according to a paper published in the British Journal of General Practice.

In an NIHR-funded study, researchers from the Universities of Bristol, Cambridge, Durham and Exeter conducted interviews with patients being referred for possible lung and colorectal cancer.

They found that patients were rarely involved in the decision to be referred for investigation and that reasons for referral tended to be couched in non-specific terms rather than ‘cancer investigation’, even when the patient was on a cancer-specific pathway.

The National Institute for Health and Care Excellence (NICE) referral guidelines emphasise that the patient should be involved in the decision-making process and be informed of the reasons for referral. This is the first time that research has examined the extent to which these guidelines are borne out in practice.

Dr Jon Banks, Research Programme Manager at the University of Bristol’s Centre for Academic Primary Care, said: “GPs face a difficult challenge when assessing whether to refer a patient for cancer investigation because many cancer symptoms are also caused by benign self-limiting illness.

“A GP referring a patient with symptoms indicating risk levels around 5 per cent may withhold discussion about cancer because they do not want to raise patient anxiety, and it is known that patients can find being referred for cancer particularly stressful.

The researchers found that problems can occur when a full dialogue about the referral is withheld. For example, one patient recalls seeing her details on a computer screen, prior to her secondary care appointment: ‘I was looking at the screen, they don’t actually say it, but I was reading on the screen it said ‘cancer referral’ now nobody had said that to me, and I was looking at it and that made me upset when I saw it on the screen… it was a bit scary and I was already upset, so I got really upset.’

The lack of information about referrals led to concern among some patients when their referral was processed quickly on the two week wait pathway. One patient commented: ‘The fact they’d bothered to ring up and get me in early…. that began to ring a few alarm bells. There must be something there that makes it important that we short-circuit the system.’

The group also found a discrepancy between the aims of recent public health cancer awareness campaigns to encourage a cancer-based dialogue, and what is happening in clinical practice.

Dr Banks added: “Patients are being encouraged to go see their GP for what patients may perceive as everyday ailments, albeit they have persisted for longer than usual. The message is that it is appropriate to discuss these symptoms and the possibility of cancer with the GP. But our research indicates a reluctance among GPs to instigate these kinds of conversations.”

The research was based on transcripts of 34 interviews with patients. They had been identified by research nurses as having one of a number of specified respiratory and lower gastrointestinal (GI) symptoms potentially associated with lung and colorectal cancer, respectively.

Patients had been referred via two main pathways. The first was the fast-track, two-week wait route, whereby patients were expected to be seen by a cancer specialist within two weeks of referral, for which the patient would normally have met the symptom-based referral criteria in the NICE guidelines. The second route was via referral to a routine clinic, with a longer waiting time, at which the patient would not necessarily see a cancer specialist.

The patients was purposively sampled for individuals to interview who varied in relation to age, sex, education level, diagnosis, and referral pathway.

The National Institute for Health Research (NIHR) is funded by the Department of Health to improve the health and wealth of the nation through research. Since its establishment in April 2006, the NIHR has transformed research in the NHS. It has increased the volume of applied health research for the benefit of patients and the public, driven faster translation of basic science discoveries into tangible benefits for patients and the economy, and developed and supported the people who conduct and contribute to applied health research. The NIHR plays a key role in the Government’s strategy for economic growth, attracting investment by the life-sciences industries through its world-class infrastructure for health research. Together, the NIHR people, programmes, centres of excellence and systems represent the most integrated health research system in the world. For further information, visit the NIHR website.