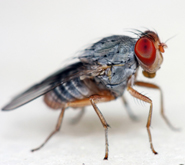 Scientists have shown how the common fruit fly Drosophila, which possess similar electrophysiological and pharmacological properties as humans, could now be used to screen and develop new therapies for alcohol-related behavioural disorders and some genetic diseases.

Scientists have shown how the common fruit fly Drosophila, which possess similar electrophysiological and pharmacological properties as humans, could now be used to screen and develop new therapies for alcohol-related behavioural disorders and some genetic diseases.

Researchers from the University’s School of Physiology and Pharmacology have been using the fruit fly to study the effects of alcohol on a particular gene found within potassium channels in the brain.  The results, published in PLOS ONE, have validated the fruit fly’s compatibility with this type of analysis to pave the way for further study in this area.

Potassium channels in the brain act as nano-switches that generate small electrical impulses that help encode information in our brain, make our heart beat and generate muscle contraction. Considered as the ‘spark of life’ these channels form pores that allow the flow of ‘charged’ potassium across our cell membranes, this allows information to be encoded as electrical impulses in the brain’s neural circuit.

The team has been studying the KCNQ family of genes, a subtype of the potassium channel group, responsible for generating changes in the excitability of neurons that underlie memory formation and the release of dopamine — a chemical linked to the brain’s central reward pathway that is stimulated after pleasurable activities. However, this reward system can become hi-jacked by alcohol, other addictive drugs or gambling that can cause an excess of dopamine release.

Although these important genes help regulate many other important physiological functions, when they are mutated they cause a range of common human diseases and disorders.

The team’s findings show that the role of KCNQ in alcohol behaviour can be determined for the first time by using the fruit fly Drosophila. The flies lacking the KCNQ genes showed increased sensitivity to the sedative effects of alcohol with about half of these important channels being blocked after 20 mM alcohol (the amount in the blood after we drink two pints).

The fruit fly’s compatibility with this type of analysis has the potential to allow both the identification of the underlying mechanism for this behaviour and screening for new therapies for alcohol-related behavioural disorders and KCNQ-related diseases such as abnormal heart rhythm, Type II diabetes, deafness and epilepsy.

Dr James Hodge, lead author from the University’s School of Physiology and Pharmacology, said: “There are about 340 ion channel genes in our genome whose mutation lead to over 60 diseases, however finding the most effective way to study these mutations is a complex and lengthy task. The high throughput capability of Drosophila offers a rapid, economic and effective means to model the changes in molecular signalling that underlie these channelopathies that allows whole organism screening for new drug treatments in line with the research council priority of 3Rs (reduction, refinement and replacement) in animal research.

“Our findings validate the use of the fruit fly to study KCNQ channels as its neuronal function and neural response to alcohol suggests it functions in a similar way in humans.”