Should we trust scientists? 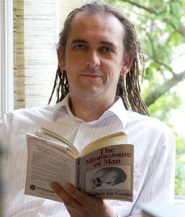 Professor James Ladyman, who is leading the Centre for Science and Philosophy

Leading voices from the world of science are gathering in Bristol to debate the extent to which scientists inform policy and how far we should trust their views. The free event on Monday, 3 December, organised by the University of Bristol’s Institute for Advanced Studies, will look at how difficult decisions are made – from culling badgers to building nuclear power stations and planting GM crops.

The free event on Monday, 3 December, organised by the University of Bristol’s Institute for Advanced Studies, will look at how difficult decisions are made – from culling badgers to building nuclear power stations and planting GM crops.

On the panel is Dr Claire Craig, who is Deputy Head of the Government Office for Science, which is responsible for advising the Prime Minister and the Cabinet on science and engineering issues.

She is joined by Professor Dame Janet Finch, from the University of Manchester, who has been honoured by the Queen for services to social science and higher education. Her research expertise lies principally in studies of family relationships, especially relationships across generations.

Also on the panel is eminent geophysicist Professor Herbert Huppert, who heads up the Institute of Theoretical Geophysics at Cambridge University, and Dr Helen Lambert, a Reader in Medical Anthropology from the University of Bristol who has researched a wide range of public health issues.

It coincides with the launch of the Centre for Science and Philosophy at Bristol University, a joint initiative with the Institute for Advanced Studies to reinforce Bristol’s position as the leading university for philosophy of science in the UK and one of a small handful of such centres globally.

The Centre, led by Professor James Ladyman, promotes the understanding and interpretation of science by supporting collaborative work between philosophers and researchers in history, economics, logic and mathematics, engineering, psychology, physics and the chemical, biological, medical, geographical, social and political sciences.

The launch event, on Tuesday 4 December from 6pm to 8pm in the Great Hall of Wills Memorial Building, will demonstrate the importance of philosophical reflection on science with four short talks from leading philosophers at Bristol, Exeter and King’s College universities.

For further details and to book for the launch, please click here.

Both events have been supported by the Public and Ceremonial Events Office.