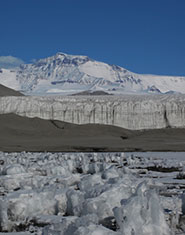 The ice margin of an Antarctic glacier, depicting frozen lake sediments in the foreground. When ice sheets form, they overrun organic matter such as that found in lakes, tundra and ocean sediments, which is then cycled to methane under the anoxic conditions beneath the ice sheet. J. L. Wadham 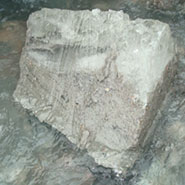 Blocks of ice containing subglacial sediments were extracted from the margins of several glaciers and used by the authors in long term incubation experiments aimed at detecting subglacial methane production. J. L. Wadham

The Antarctic Ice Sheet could be an overlooked but important source of methane, a potent greenhouse gas, according to research published today in Nature and conducted by an international team led by Professor Jemma Wadham from the University of Bristol's School of Geographical Sciences.

The Antarctic Ice Sheet could be an overlooked but important source of methane, a potent greenhouse gas, according to research published today in Nature and conducted by an international team led by Professor Jemma Wadham from the University of Bristol's School of Geographical Sciences.

The new study demonstrates that old organic matter in sedimentary basins located beneath the Antarctic Ice Sheet may have been converted to methane by micro-organisms living under oxygen-deprived conditions.  The methane could be released to the atmosphere if the ice sheet shrinks and exposes these old sedimentary basins.

Team leader, Professor Wadham said: "This is an immense amount of organic carbon, more than ten times the size of carbon stocks in northern permafrost regions.  Our laboratory experiments tell us that these sub-ice environments are also biologically active, meaning that this organic carbon is probably being metabolised to carbon dioxide and methane gas by microbes."

They also calculated that the potential amount of methane hydrate and free methane gas beneath the Antarctic Ice Sheet could be up to 400 billion tonnes (that is, 400 Pg of carbon), a similar order of magnitude to some estimates made for Arctic permafrost.  The predicted shallow depth of these potential reserves also makes them more susceptible to climate forcing than other methane hydrate reserves on Earth.

Dr Sandra Arndt, a NERC fellow at the University of Bristol who conducted the numerical modelling, said: "It's not surprising that you might expect to find significant amounts of methane hydrate trapped beneath the ice sheet.  Just like in sub-seafloor sediments, it is cold and pressures are high which are important conditions for methane hydrate formation."

If substantial methane hydrate and gas are present beneath the Antarctic Ice Sheet, methane release during episodes of ice-sheet collapse could act as a positive feedback on global climate change during past and future ice-sheet retreat.

Professor Slawek Tulaczyk, glaciologist from the University of California, Santa Cruz, said: "Our study highlights the need for continued scientific exploration of remote sub-ice environments in Antarctica, because they may have far greater impact on Earth's climate system than we have appreciated in the past."

The Cabot Institute at the University of Bristol carries out fundamental and responsive research on risks and uncertainties in a changing environment.  Our interests include natural hazards, food and energy security, resilience and governance, and human impacts on the environment. Our research fuses rigorous statistical and numerical modelling with a deep understanding of interconnected social, environmental and engineered systems – past, present and future. We seek to engage wider society – listening to, exploring with, and challenging our stakeholders to develop a shared response to twenty-first century challenges.