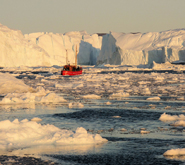 Icebergs discharging from the largest outlet glacier in Greenland, that has doubled in speed since in the last ten years. Professor Jonathan Bamber

Scientists using recent satellite data combined with historical aerial photography from the 1980s have discovered rapid, short-lived ice loss events in Northwestern Greenland, according to research published in Science. The findings challenge predictions about the future response of the Greenland Ice Sheet to increasing global temperatures.

Scientists using recent satellite data combined with historical aerial photography from the 1980s have discovered rapid, short-lived ice loss events in Northwestern Greenland, according to research published in Science. The findings challenge predictions about the future response of the Greenland Ice Sheet to increasing global temperatures.

There has been much interest about the reported increase in mass loss from the Greenland ice sheet over the last decade or so when satellite observations have been available. Some scientists believe that the speed-up of glaciers flowing into the ocean is the sign of a long-term trend that will continue into the future. However, the research team, comprising scientists from Denmark, Netherlands and the University of Bristol, found that this recent ice loss from Greenland is not unique and that similar speed-ups occurred in the 1980s but then stopped after a few years.

A large portion of the Northwest coast of Greenland, around 700 km in length, was surveyed for changes in elevation that were linked to glacier speed-up between the mid 1980s and now. The region includes about a dozen major outlet glaciers flowing into the ocean, with the potential to affect sea level. The group found that some glaciers speeded-up in the 1980s and others in the 2000s. There was no consistent behaviour and adjacent glaciers could have markedly different responses to the same climate forcing.

The results show that dynamics of glaciers in Greenland are complex and difficult to predict simply from what the climate is doing. The results have important implications for understanding how the Greenland ice sheet might respond in the future and place the recent satellite observations into a longer-term context. They demonstrate that glaciers around the margins of Greenland can speed-up and slow down without there being any underlying long-term trend.

Professor Jonathan Bamber from the University’s School of Geographical Studies said: “Our results indicate that the ice mass changes were primarily caused by short-lived dynamic ice loss events rather than changes in the surface mass balance. We also demonstrate how to push the short satellite record further back in time: something that is crucial to do to improve our understanding of ice sheet dynamics.

“What our results show is that glaciers speed up and slow down in an unpredictable way that is difficult to predict for any one glacier.”