Scientists identify mechanisms in aspirin that help protect against cancer 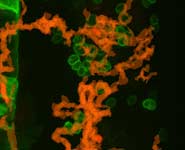 Researchers from the Universities of Bristol and Sheffield have identified how long-term use and low doses of non-steroidal anti-inflammatory drugs (NSAIDs) such as aspirin may help to stave off cancer.

Recent clinical studies have indicated that long-term usage of non-steroidal anti-inflammatory drugs (NSAIDs) such as aspirin can significantly reduce the risk of various cancers — some up to 30 per cent.  New findings, published today [31 May] in Current Biology, provides fresh evidence into their protective properties.

Until now, the processes that underpin these protective effects were unclear but researchers from the Universities of Bristol and Sheffield have now identified how long-term use and low doses of NSAIDs may help to stave off cancer.

Using translucent zebrafish larvae the researchers were able to visualise how white blood cells interact with the early cancer cell formation as they arise in tissues. Previous studies have shown that cancer cells are less likely to divide if the white blood cells can be prevented from contacting the precursor cancer cells, suggesting that white blood cells – the immune cells – have the ability to promote disease by providing some kind of growth signal.

Lead author, Dr Yi Feng from Bristol's School of Biochemistry, found that these white blood cells, whose normal role is to fight off infections, supply the cancer cells with essential survival factors and identified one of these key factors as prostaglandin – PGE2.  If the immune cells are genetically deleted then the cancer cells cannot grow but they begin growing again if the researchers feed them PGE2.

The results show that at least in part, taking drugs like aspirin, which are generally taken for cardiovascular problems, prevent the development of cancer by starving the cancer cells of this source of white blood cell early-growth support.

Paul Martin, Professor of Cell Biology at the University of Bristol’s Schools of Biochemistry and Physiology and Pharmacology and senior author of this study, said: “These findings are important as they help explain the underlying cellular processes at work which could be used to develop potential new therapies for eliminating early-stage cancer in humans.”