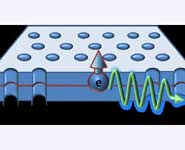 The University of Bristol’s Quantum Photonics group have been awarded grants of over €3 million to solve the problem of sending information in single quantum particles over global distances.

Dr Ruth Oulton and Professor John Rarity at the Centre for Quantum Photonics have been awarded a €2 million Future and Emerging Technologies grant from the European Commission and a €1.1 million CHIST-ERA award from European national funding agencies, including the EPSRC.

The use of particles of light, photons, to encode and send information could revolutionise the way we secure all internet transactions, while computing using photons promises much faster ways of tackling hard problems. The aim of both these projects is to use semiconductor devices to mediate the interaction between photons providing a quantum memory and quantum logic gates to extend these quantum applications to longer distances and harder problems.

The challenge for the CHIST-ERA project, the Solid-State Quantum Network (SSQN), led by Professor John Rarity, is to use semiconductor devices, the same technology as the lasers used conventional telecommunications, on the nanoscale.  Nanosized “quantum dots” trap a single electron, which act as the memory for a quantum repeater.  The single electrons store information for a millionth of a second, enough for a set of base-stations, spaced by 100 km to transfer the information in a single photon over 1,000 km.

The SPANGL4Q team will introduce a novel technique to transfer the information in a single electron to a few nuclei in the quantum dot.  Nuclei are known to store information in their spin for much longer than electrons: possibly up to a few seconds.  The few seconds of storage time would be long enough to send a photon to a satellite, making a global communication network possible.

One of the aims of the SPANGL4Q project is to explore the design of the semiconductors from a fundamental physics point of view.  Just as in conventional telecommunications, the quantum devices use photonic technology to transfer light from a fibre arriving from long distances to a small optical trap, allowing the memory to work more efficiently.  However, to use these optical traps to manipulate the electron spin is not as well established.  The SPANGL4Q team will go back to the drawing board to begin polarisation engineering in these structures.  Understanding in more detail how light behaves in these structures should lead to many more ways to manipulate light for a wide variety of applications in telecommunications, medicine and security.

It spans the School of Physics and Department of Electrical and Electronic Engineering in the Faculties of Science and Engineering, and the Centre for Nanoscience and Quantum Information.

The goal of the group’s research is to explore fundamental aspects of quantum mechanics, as well as work towards future photonic quantum technologies.

The Solid-State Quantum Network (SSQN) project, led by the University of Bristol consists of a team of four European groups: the Laboratoire de Photonique et de Nanostructures, CNRS, Paris; the Julius Maximillians Universität Würzburg; and Imperial College London. The project is funded as part of the CHIST-ERA network of national funding councils, including EPSRC.