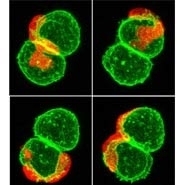 A red neutrophil (white blood cell) gliding over a doublet of transformed goblet cells in the skin of the zebrafish larvae.

The imaging of tumour growth in zebrafish has revealed for the first time how cancer cells have the capacity to co-opt the immune system into spreading disease, leading the way for investigations into potential therapies for eliminating early-stage cancer in humans.

Using different coloured fluorescent tags, scientists at the University of Bristol labelled the white blood cells of the translucent zebrafish in order to track the growth of tumours with live images.  Studies were carried out using zebrafish because they conserve many of the molecular and cellular components of tumour formation seen in mammals and they are absolutely translucent making it easy to see the cells as they move around and grow.

Interestingly, the chemical compound that acts as a draw between the two sets of cells was shown to be hydrogen peroxide – commonly used as a disinfectant or antiseptic, but also a harmless and natural by-product produced by the body’s metabolic process.

These dramatic findings, which are the result of a collaboration between academic colleagues in the UK and Italy (Institute of Molecular Oncology, Milan) are reported in the December edition of the prestigious online journal PLoS (Public Library of Science).

Describing the work, Paul Martin, Professor of Cell Biology at the University of Bristol’s Schools of Biochemistry and Physiology & Pharmacology, who supervised post-doc fellow Yi Feng in the research project, said: “By visualizing the earliest interactions between cancer cells and their host environment, we have shown that even from their earliest stages tumours don’t just avoid being destroyed by the immune system.  Rather, they appear to court an immune response, co-opting the body’s innate immune system to aid and abet their growth.”

The team used several methods to express the human oncogene, or cancer-promoting white blood cell, HRAS, in early stage zebrafish embryos.  The oncogene was labelled with different coloured fluorescent tags and engineered to be activated in a particular set of skin pigment cells, melanocytes.

Researchers monitored the first hours and days of development.  As the embryo grew, some of the melanocytes were transformed by HRAS.  Those transformed melanocytes were found to actively attract the innate immune cells.  The researchers got the same results, after inserting HRAS into different mucous-secreting cells, and again when experimenting with a different oncogene, SRC.

Taking the tests one step further, the researchers found that a laser cut in the same region of the zebrafish larvae resulted in a very similar immune response.  Early immune cells responded to the cut and to early cancer growth in a very similar manner - both wounds and tumour cells produced H2O2, and the researchers found that immune cells were drawn up the H2O2 gradient towards the cut or cancer, reinforcing a longstanding notion that cancers behave like a non-healing wound.

Prof Martin added: “Yi’s movies in Zebrafish larvae give us the first insight into how immune cells sense and then attempt to deal with the earliest stages of cancer.  Now we can look closer to figure out why it is that immune cells seem to aid growth of these young cancer cells and figure out ways for guiding immune cells how better to search and destroy.”