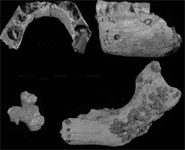 New research, based on a study of human fossils found in Murcia, Spain, is shedding some light on what were probably the last Neanderthals.

New research, published in the Proceedings of the National Academy of Sciences, is now shedding some light on what were probably the last Neanderthals.

The human fossils from the upper levels of the Sima de las Palomas are anatomically clearly Neanderthals, and they are now securely dated to 40,000 years ago.  They therefore establish the late persistence of Neanderthals in this southwestern cul-de-sac of Europe.  This reinforces the conclusion that the Neanderthals were not merely swept away by advancing modern humans.  The behavioral differences between these human groups must have been more subtle than the Middle-to-Upper Paleolithic technological contrasts might imply.

In addition, the Palomas Neanderthals variably exhibit a series of modern human features rare or absent in earlier Neanderthals.  Either they were evolving on their own towards the modern human pattern, or more likely, they had contact with early modern humans around the Pyrenees.  If the latter, it implies that the persistence of the Middle Paleolithic in Iberia was a matter of choice, and not cultural retardation.

From the Sima de las Palomas, other late Neanderthal sites, and recent discoveries of the earliest modern humans across Europe, a complex picture is emerging of shifting contact between behaviorally similar, if culturally and biologically different, human populations.  We are coming to see them all more as people, flexibly making a living through the changing human and natural landscapes of the Late Pleistocene.

The Neanderthals: human ancestors or aliens from outer time? 18 May 2007

How modern were European Neanderthals? 24 August 2006