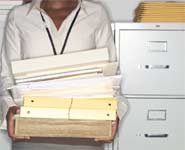 ‘Macho, bullying and unfriendly workplace cultures’ are a common experience of ethnic minority women in the UK labour market and workplace, according to a major new study published today, yet good management and positive role models make a difference.

‘Macho, bullying and unfriendly workplace cultures’ are a common experience of ethnic minority women in the UK labour market and workplace, according to a major new study published today [Thursday, 5 July 2007], yet good management and positive role models make a difference.

Conducted by researchers from the University of Bristol and Queen Mary, University of London on behalf of the Equal Opportunities Commission (EOC), Workplace cultures: what does and does not work’ explores the impact of workplace culture on women from three ethnic minority groups: Bangladeshi, Black Caribbean and Pakistani.

The report reveals that although organisations have adopted often extensive equality and diversity policies, there exists an implementation gap between those policies and practice. Women in the three ethnic groups reported hierarchies in their organisations with respect to gender and race; regarded the lack of opportunities for promotion, alongside the devaluation of qualifications and experience, as a major point of concern; and saw racism as being a regular characteristic of their employment. The role of line managers was seen as critical in this respect: a good line manager was capable of ensuring harmonious and fair workplace relations; a bad line manager could reinforce bad practice and drive ethnic minority women from the workplace.

Many employers are aware that they cannot afford to overlook well-qualified young women from any ethnic group and recognise that a multi-ethnic and multilingual workforce will better serve the needs of customers in a multicultural world. Yet despite a skills shortage, there is an under-utilisation of existing talent: Pakistani and Bangladeshi women are more heavily concentrated than white women in a ‘restricted’ range of occupations (including retail, clerical and educational support work), while Black Caribbean women are concentrated in the public sector, frequently in lower-level occupations than their qualifications and experience merit.

Ethnic minority women place great importance on positive role models, and the research reveals a number of areas where strategies for change have been successfully implemented. Based on these, the report offers a set of guidelines [see notes to editors] to help organisations work towards a more diversity-friendly culture. Crucially, it recommends that to make policies for promoting equality and diversity effective they need to be embedded throughout all levels of organisations and become part of both informal and formal cultures.

Professor Harriet Bradley, in the Department of Sociology at the University of Bristol, said: “There is an implementation gap between policy and practice, but our research demonstrates a number of examples of good practices which could be more widely adopted and make a difference to the working lives of ethnic minority women.”

Professor Geraldine Healy, Queen Mary, University of London, added: “Organisations need to be alert to the complex and insidious ways that workplace cultures may act to the detriment of Bangladeshi, Caribbean and Pakistani women. Stereotypes persist and continue to influence decisions on recruitment and promotion. The value of role models was immense and provided evidence of what could be achieved.”

Caroline Slocock, Chief Executive of the EOC, said: "EOC research shows that young Pakistani, Bangladeshi and Black Caribbean women are striding ahead in schools and university and are ambitious to combine a career with a family. Yet many employers are missing out on their skills and women from these backgrounds still find it difficult to get a job or to get promoted and many end up in certain types of work which is often low paid.

"As this research shows, there is much that employers can do to create a culture in the workplace that welcomes ethnic minority women and doesn't put barriers in their way. Simple things can help to develop what we call 'cultural intelligence', such as reaching out to schools to demonstrate that all applications are welcome, ensuring work-based social events are not always based around alcohol, which can exclude some people,  and opening up flexible working at all levels to make it easier to combine work with family."

Some 152 people took part in the study, of whom 130 were ethnic minority women. The research was multi-levelled. It involved: initial ‘scoping’ interviews with experts and managers who have substantial experience of equality and diversity issues; 11 focus groups in London, Birmingham and Bristol to explore the experiences of women in varied circumstances; and six case studies to explore the impact of differing cultures in some sectors where women from these ethnic backgrounds are concentrated: health and welfare, education, retail and administration. In each case study organisation we interviewed 10 women employees (a mix of Bangladeshi, Black Caribbean and Pakistani) and two managers. We also collected documents pertaining to the organisation and its policies. Finally, women who owned small businesses or worked within ethnically-owned businesses were interviewed.

10 guidelines for a diversity friendly workplace

Here are 10 practical ways to create a workplace that works for everyone. These are real life examples collected from our consultations with employers.

This report formed a part of the EOC's two year long investigation looking at ethnic minority women’s experiences at work, Moving on Up?. The report identified five "employment gaps" between the position of Pakistani, Bangladeshi or Black Caribbean women and white women: labour market participation, unemployment, progression, pay gaps, and segregation into a narrow range of professions.

1. Pakistani and Bangladeshi women have the lowest labour market participation rates of any women and much lower than men from the same ethnic group, but women born in the UK are twice as likely as those born abroad to be economically active (EOC, 2007).

2. Working age Bangladeshi and Pakistani women are around four times more likely to be unemployed than white British women and Black Caribbean women are twice as likely (EOC, 2007).

3. 11 per cent of white British women are senior managers or officials, compared to 9 per cent Black Caribbean and Pakistani and only 6% Bangladeshi women (EOC, 2007).

5. Almost a third of all Black Caribbean women work in health and social work, compared to less than a fifth of white women. A quarter of Pakistani and Bangladeshi women work in wholesale and retail, where the median pay for sales assistants, for example, is £5.15 per hour, £4.61 less per hour than average earnings for women working full time (EOC, 2006).

Numbers of ethnic minority women In the Great Britain population: