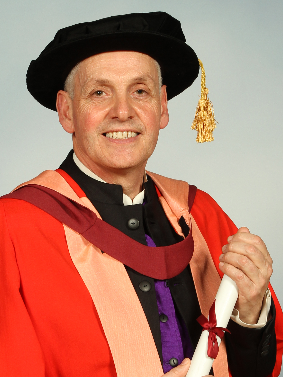 Doctor of Science
Thursday 21 February 2019 - Orator: Professor Jane Memmott
Pro Vice-Chancellor,
An honorary degree is given to distinguished individuals who merit special recognition for outstanding achievement and distinction, in a field or activity consistent with the mission of the University. I would like to offer you some comments about Simon Pugh-Jones to explain why I feel he is a perfect recipient for an honorary degree.
Simon studied Civil Engineering at Warwick University before working for five years for British Rail, primarily as a bridge designer but also designing electrical systems and track infrastructure. In 1989 he joined Writhlington School, a secondary school near Bath, as a physics teacher.
Nobody forgets a good teacher. I still think of some of my secondary school teachers with real warmth nearly 40 years later – Mrs Keogh for biology, Mr Lark for chemistry, Mrs Gatwick for english, Mr Bear for maths and Mrs Power who tried very hard to teach me french. Teachers make a huge difference to many people’s lives in both the short and long term, and Simon Pugh-Jones has done this on a phenomenal scale.
Two years after joining the school, in 1991, Simon set up the Writhlington School Orchid Project to develop student expertise in biotechnology and enterprise. It is this project which is the basis of his award today. It combines excellence in science with horticulture, enterprise and sustainable development.
The Orchid Project generates a significant income from students’ laboratory-based orchid tissue culture, and this enterprise has funded fourteen overseas student expeditions to work with tropical communities, schools and conservation groups in Central and South America, Africa and Asia. Their projects pioneer conservation and education capacity building in these countries. They also give the pupils who go from Writhlington School the experience of a lifetime.
Simon’s students have set up the first orchid propagation laboratories in Rwanda and in Southern Laos. In Rwanda Simon has worked closely with the Kitabi College of Conservation and Environmental Management, and with several schools in the capital, Kigali, where the Writhlington School Orchid Project has enhanced the science curriculum and conservation practice.
In the UK, Simon and his student team have led a number of orchid education initiatives, to develop public displays of plants at the Eden Project, Cambridge University Botanic Garden, the Bristol Aquarium and our very own University of Bristol Botanic Gardens.
Simon’s projects are integral to the science curriculum delivered at Writhlington School, where the links and expertise developed through his projects allow students to carry out significant original research, pursue real design projects and communicate with a global community of scientists and engineers.
Orchid Project students won the UK National School Science Competitions on three occasions, and Simon’s enterprise teams were national or regional winners in the UK Young Enterprise Competition four times. In 2018 they won the Grand Champions of Europe title for their plants at the European Orchid Show in Paris. Other highlights include Gold medals at Chelsea and Hampton Court in the UK, at two European Orchid Shows and at the Cape Town Flower Show in South Africa. In short, this is an amazing, very inspiring and highly successful project run by Simon Pugh-Jones.
His work is strongly supported by links with some of the UK’s leading institutions, including the Royal Botanic Gardens at Kew, the Eden Project, and the Universities of Bristol, Kent and Cambridge. Simon is working with schools in India, Rwanda and Malaysia to share his expertise on delivering effective science and technology through conservation and plant science.
To give you an idea of the esteem he is held in, here are some quotes from parents and students at Writhlington School.
From Gareth Buckle, parent:

‘As a parent of two girls that are in Simon’s Orchid Project, I can honestly say all teachers should reflect this man! He includes all pupils in his dream!’

‘Simon is a real role model. He inspires, not only students at Writhlington, but students in schools across the globe that the project has extended to.’

‘Simon is a man of many talents, from teacher to horticulturalist, he is full of energy and enthusiasm, which is passed on to the students, and helps to make the Orchid Project such an amazing club to be a part of.’

In 2013 Simon was awarded an MBE for services to education, an honor he considers shared with the generations of students that have given such commitment to the projects he initiated. Pro Vice-Chancellor, today in 2019, I present to you Simon Edward Pugh-Jones, as eminently worthy of the degree of Doctor of Science, honoris causa.